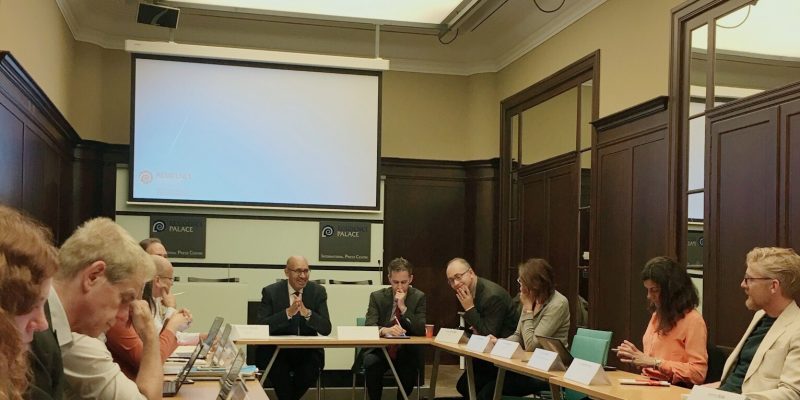 Opening the round table discussion, Mr. Désir expressed his commitment to work with journalist organisations and media freedom groups to defend an increasingly challenging media freedom landscape in the 57 OSCE participating states.  He outlined the key priorities and mandates including the safety of journalists, combating impunity, countering propaganda disinformation and fake news, counter-terrorism measures, freedom of expression, media pluralism and regulation.

Ricardo Gutiérrez, EFJ General Secretary, said, ”Facing with the increasing attacks on journalists and the precariousness of the profession, it is becoming ever more important for journalists’ organisations and media NGOs to build stronger coalition in order to counter the enemies of media freedom.”

Gutiérrez highlighted the media freedom situation in Turkey with 157 journalists arrested including the recent arrest of French journalists Loup Bureau.

The case of arrested journalist Hamza Yalçin in Spain, the declining media freedom in Ukraine, Poland, Hungary, Russia, the continuing state of emergency in France and Turkey, the ongoing media crackdown in Azerbaijan, the new surveillance laws in France, UK, Germany, the digital security and the role of public and private media actors were among the issues discussed between civil society representatives and Désir.

Participants  pointed out the implementation gap among OSCE participating states in enforcing media freedom and the lack of political willingness to improve the situation. Faced with the challenge, participants focused the discussion on finding new ways and cooperation with a wide range of stakeholders including journalists’ organisations, media freedom groups, members of the public, inter-governmental organisations, European institutions and technology companies.

In particular, there is an urgent need to rebuild trust in the media especially among members of the public through more engagement.

The meeting ended in good spirit with renewal commitment from the attended organisations to further the cooperation in the future.