What is the future of financing digital journalism? 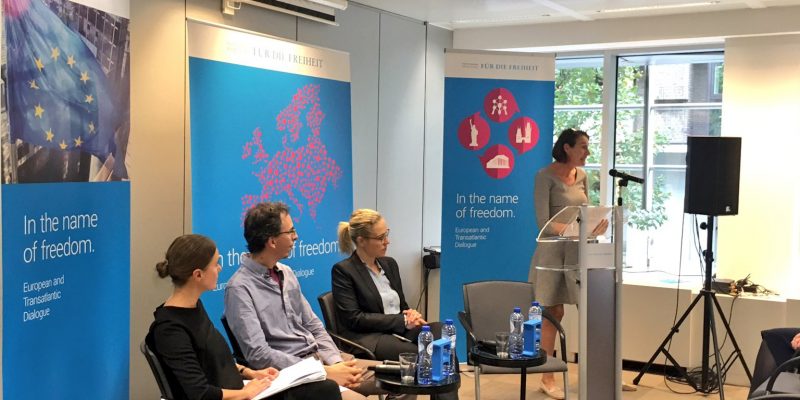 
The media environment is becoming increasingly digital, mobile and more and more people consume news directly on social media. Which innovative financing tools will make quality journalism sustainable in the future and how can we preserve a lively news environment that informs citizens and scrutinizes societal power hubs? Those were the main questions of the debate, organised yesterday (07/09/2017) by the Friedrich Naumann Foundation (FNF) in cooperation with the European Federation of journalists (EFJ). It was moderated by Caroline Margaux Haury, European Affairs Manager at the FNF. Renate Schroeder, director of the EFJ, gave opening remarks.

“The evolution of the Internet makes it easier to produce content for people who aren’t professional journalists,” said David Domingo, professor of Journalism at the Université Libre de Bruxelles (ULB). It also resulted in the loss of monopoly for media companies when it comes to advertising market. “The competition with social media is almost a lost battle for media,” he added. Besides that, there is a general lack of trust in politicians, institutions and even among ourselves, so we need media education for people to make the difference between the work of a professional journalists and of a ‘citizens’ journalists’, he said.

Juliane Leopold, digital consultant, i.a. for tagesschau.de, highlighted the spread of smart phones as one of the biggest stumbling blocks of digital journalism. “A recent survey showed that users spent on average 50 minutes per day for scrolling on Facebook’s platforms in comparison to 5 minutes they spent for reading the newspaper,” she outlined.

At the same time, the digital age also created a lot of new, interesting jobs in the field of digital journalism, said Anna-Maria Wagner from the German Association of Journalists (DJV). “The problem in Germany is, however, they often offer very little social protection – they are less paid and without a collective agreement,” she warned.

When talking about financing, Leopold drew attention to the fact that too many media outlets simply copy the successful strategies from global players (such as pay walls), which are not necessarily suitable for smaller markets: “There is too much reliance on Google, Facebook etc. and media have given up on finding independent financing,” she added and proposed more community media with connecting people around a certain topic or a community of purpose.

Free market and money from foundations, grants, crowd-funding campaigns and long-term funding are the suitable solutions according to Wagner. “Publishers are responsible for their business models to work,” she added. Domingo, on the other hand, sees a model between the free market and small scale. He gave as an example the French regional newspaper Nice-Matin which is now a cooperative owned by the employees: “If we rely only on free market, that leaves media in the hands of political interests or managers who want as much profit as possible.”

Domingo concluded by emphasizing the need to support the production structure rather than paying the end product and added that publishers also need to make themselves relevant in this production.