Berlin forum: With quality against lies and hate in the net 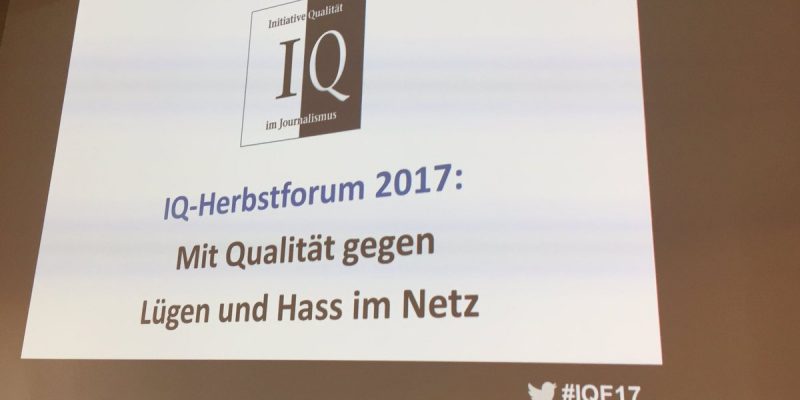 How to deal with audiences, how to create trust, how to create facts instead of fakes and what must be done for good journalism to survive. This and many other central questions around fake and facts were discussed on 16 October at the ninth Forum of the “Initiative Qualität im Journalismus (IQ)” in Berlin with about 80 media experts.

Professor Tanjev Schultz said that given the speed of false news and propaganda in today’s social media, good journalism is ever more important and can only survive when it is  better than its “loud critic” offer. He explained that lack of trust in media has increased, which is shown by skepticism, indifference or even cynicism.  According to a recent study about trust in media, there is a polarisation within the audience of those who increasingly mistrust and those who increasingly trust. He acknowledged that it is not easy to define good media quality and trust is not always there for the good reasons. Therefore to find the right measures to improve trust is not easy at all.  Is transparency and fact checking leading to a growth in trust?

“What distinguishes good journalism from bad journalism is labour”.  By quoting  Katharine Viner, The Guardian, Schultz highlighted the importance of investing in resources and staff as a prerequisite for responsible reporting.

In the first panel on “Create facts. Initiatives against fakes” Rike Woelk, deputy editor-in-chief of German public broadcaster ARD main news tagesschau.de and responsible for the anti-fake-news-Portal Faktenfinder, and Jutta Kramm , chair of the  Fact-Checking-Ressort of the research center  CORRECTIV explored the difficulty of the work, “as fakes are never black or white but grey”. According to both, the main problem is that information and facts are taken out of their context. It is very time consuming to  discover fake news. Kramm said that media literacy is not only for kids but also for adults including mid career journalists themselves. The results of fact checks, the two experts agreed, have to be presented  where fakes and disinformation originate: Facebook and Twitter. Kramm said that the debate about fake news has had a positive effect in Germany: During the German election campaign, there were no major fake news.

“We have to reach people where they use media,” said journalist Stefan Niggemeier (Bildblog.de, ubermedien.de). He described it as a great advantage of fact-checking platforms that they tackle topics coming directly from the audience.

Stephan Ruß-Mohl, European Journalism Observatory EJO, Lugano, appealed to the legacy media to clarify their way of working. In terms of Facebook’s deal with fact checking results, he said, “We do not know how Facebook deals with reported fake news.”

The other panel dealt with hate speech and editorial responses to comments. Ellen Wesemüller, who has been leading the project “No Hate Speech” with the New German Media Makers (NdM) since September,  pointed out that more and more journalists are affected by hate speech.

Wesemüller emphasized the need for integrity and solidarity within the newsrooms. Legal advice and argumentation guidelines could help to fight against hate speech. Those who abuse the commentary function in online articles for hate  must be expelled. He said that in case of insufficient staff, it is better to delete the commentary function. Other means of dealing with unqualified hate messages could be replies, transparency or humorous irony, said Wesemüller.

Heinrich Maria Löbbers and Andreas Völkel reported about daily biased harmful comments. On the one hand, it is a question of communicating with the audience. On the other hand, journalists are often not only offended but threatened.  Löbbers is a member of the editorial board of the newspaper “Sächsische Zeitung” and stated that on many topics online, no commentary could even be offered because of the very biased (often hateful) responses. Andreas Völkel, one of the founders of the hyperlocal Dortmund online portal nordstadtblogger.de, described attempts to inform the community, in the case of xenophobic and right-wing commentaries, in such a way as to mobilize protest against hate directly from the social online networks.

IQ spokeswoman Ulrike Kaiser   at the end of the event said that  independent diverse media coverage faces  difficulties in times of “Shitstorms” on the one hand and editorial savings on the other hand. Only with quality, transparency and a professional solidarity among journalists it can be possible to secure the social position and function of journalism in the long term. Unfortunately for many, negative emotions are a business model.