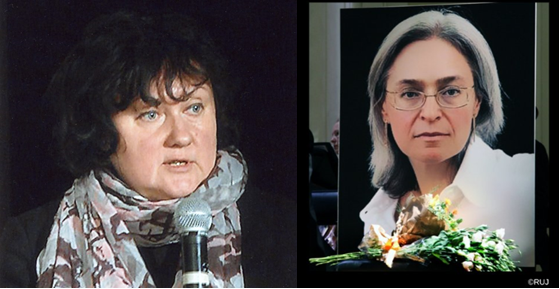 
On 2 November 2017, the EFJ Vice President Nadezda Azgikhina wrote a letter from Russia. The letter focused on fighting against hate and impunity towards journalists. Here, the EFJ publishes this letter:

The first conference devoted to Impunity in Russia took place just before the Moscow IFJ Congress in 2007. It focused mainly on the assassination of Anna Politkovskaya, the journalist murdered on 7 October 2006, and focused on other colleagues who were murdered too. For the first time, a list of deceased Russian journalists, prepared by Glasnost Defense Foundation, was presented to the international professional community. It consisted of 211 names.

Half a year before, on 17 December 2006, female journalists in Moscow arranged the first march against killings of journalists, with the slogan “Don’t shoot my mum!” This was the first public event around the issue. 5 female journalists, including myself, applied to Moscow authorities for permission for a short meeting in Pushkin Square (the authorities said that a march would bother citizens strolling on the promenade between the Moscow Journalist House and Pushkin Square). Anyway, the march happened. It ended with a moment of silence. Afterwards, organisers read obituaries for 40 minutes, and colleagues attending the event were shocked. This was the first meeting of the sort in Moscow, and we really believed that there would no longer be any murders.

In 2007 the IFJ and EFJ, together with the Glasnost Defense Foundation and the Russian Union of Journalists, started the first project devoted to combatting impunity in Russia. The project resulted in an elaborate database dedicated to recording the murder of journalists, as well as the database “Conflicts in the Media in Russia”, devoted to recording the pressures on journalists and independent media, and the attacks, threats, court cases, firing, closing of media and all forms of censorship that they faced. This database became the main tool of monitoring and for annual reports, and it was well used. The Glasnost Defense Foundation also published a weekly digest with fresh news.

From 2010 to 2013, the Russian Union of Journalists took part in an IFJ project on combatting impunity in 7 post-Soviet countries. The RUJ also helped to develop national and international networks, create bases for future co-operation, and was very efficient, especially in the co-operation of Russian and Ukrainian unions. Alongside the OSCE, IFJ and EFJ, in 2014 the RUJ established dialogue with professional organisations beyond the Russian-Ukrainian Conflict, called “Two Countries, One Profession”. This dialogue, among others, called for the safety of professionals and for the respect of their rights. They published a handbook on safety, and released 8 people from detention in Eastern Ukraine.

From 2014 to 2016, Russian journalists, together with Glasnost Defense Foundation, Mass Media Defense Center and Article 19, had very efficient projects devoted to monitoring, legal education, safety and ethics training, and created a platform to campaign against impunity in the Russia regions. It helped thousands of media professionals to get legal and professional support, to arrange campaigns around several cases, and to prevent many cases of pressure and violence.

Still, impunity remains a heavy problem in Russia. Today, the list of deceased journalists contains more than 350 names. Most of these tragedies ended with impunity, including the murder of Gagimurad Kamalov, the founder of the “Chernikov” newspaper, as well as Natalia Estemirova, Malik Ahmediloov and many others from the North Caucasus and other regions. The murderers of Anna Politkovskaya have been sent to court, but the master minds still receive impunity. Anna’s family and colleagues are not satisfied, and on the 11th memorial day of her murder the Novaya Gazeta published an article, blaming Russian authorities for a lack of political will to properly finish the investigation.

Of course, authorities hold the most responsibility, but not all of it. Today’s atmosphere of hate, well-spread in Russia especially since 2014, and a lack of strong solidarity in the professional community are also problems. Financial crises, unemployment, the cutting of jobs and of salaries has made journalists more vulnerable.

The puzzled and divided state of the journalist community reflects the situation of society as a whole, but this cannot unite efforts to protect journalists’ rights. Official TV channels regularly label independent and critical voices as a “fifth column” and as “Western agents”, also criticising NGOs and human rights defenders. Marginal right-wing groups attack independent authors and face no punishment, and online and offline threats to journalists – especially female journalists – has become everyday practice. Many colleagues believe that the deputy chief editor of the “Echo of Moscow” Tatiana Felgengauer, who was attacked by a “mad man” in her office, was also the victim of this hate and aggression dominating public space. This case was also not faced by a strong response from authorities and society. Tatiana and other journalists at the Echo have been threatened many times, and were called American agents on several radio and TV programs just before the attack.

Soon after the attack on Tatiana, the chief editor of the Echo decided to send another journalist, Xenia Larina, out of the country. Another female journalist from the Echo, Julia Latynina, is already in Europe, fearing for the lives and safety of herself and her family. The chief editor of the Novaya Gazeta, Dmitry Muratov, has announced that he plans to give weapons to his journalists, as some journalists have been sent out of Russia several times after receiving death threats. This happened just before the ‘Stop Impunity Day’ of 2017.

We should also not forget that, in 2017, some journalists are still waiting to be released: Alexander Sokolov from the RBK; Zhalaudi Geriev from the Caucasian Knot; Stanislav Aseev, a Ukrainian blogger detained in Eastern Ukraine; Nikolay Semena in Crimea; and Ali Feruz, waiting on his asylum status in detention. Many others face pressure, a lack of justice, and threats. They need our support and practical actions. Gregory Shvedov, the chief editor of the Caucasian Knot, suggested sending letters and postcards – similar to those sent to Turkish authorities – to the Chechen authorities, demanding the release of Geriev.

So, 10 years after the first big gathering devoted to combatting impunity in Russia, we should accept that this struggle was not enough. We should elaborate on more efficient measures and strategies, to stop violence against journalists and to prevent new pressures against them. Perhaps the call by the IFJ and EFJ to start a long term campaign against impunity could help us to find those new strategies, share experiences, and gather our efforts.

It is clear that the culture of impunity can only be stopped by efforts and actions of solidarity, and by mobilising the journalist community, media organisations, civil society and law enforcement, as well as by combatting hate and aggression in the media. It would be our own responsibility if we did not do our best for that mobilisation.”