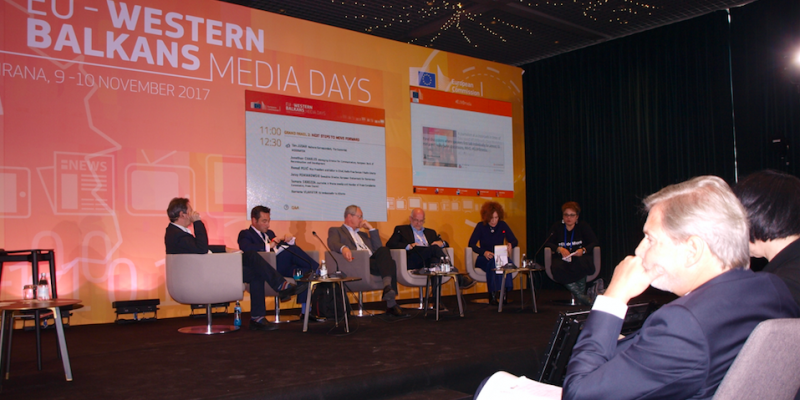 
The European Federation of Journalists (EFJ) welcomed the focus, that European Union has provided, when over 250 representatives of media, stakeholders and policymakers from the Western Balkans and the European Union met at the EU Western Balkans Media Days in Tirana, Albania, on 9 and 10 November 2017, dedicated to the important role of media in the accession process.
Two panels and six workshops gave the opportunity for participants to exchange their views and work on forward-looking initiatives for independent, sustainable and professional media, in a region where the media freedom situation is not only slow to improve, but also in some countries moving back.

In particular, the worsening situation in Serbia was highlighted by many speakers, who denounced the double discourse from state leaders and also from the EU. At the same time from Brussels announces to foresee Serbia as EU-member before 2025.

At the meeting all Serbian journalists showed their impatience bý standing up for press freedom applaud by most of the participants.
Mogens Blicher Bjerregård, president of the European Federation of Journalists (EFJ), spoke about social dialogue and also informed about the UNESCO-EFJ project “Building trust in media in South East Europe and Turkey” and emphasised the need for political will in the region:

“I met many journalists claiming that their political leaders are speaking with two voices: they support free speech when they speak internationally, but show a hostile approach at home. This has to be changed. There is no doubt that both EU and political leaders in the region must seriously step up effort to improve the situation in the Western Balkans in general, and in Serbia in particular. Social dialogue within the media is also crucial as both safe and good working conditions are prerequisites for free and independent media.”

EU-commissioner Johannes Hahn said in his final speech: “I am with you”, though it was not possible for him to give concrete promises. However, he announced, that there should be such Media Days every year, and he was in particular impressed by very strong interventions from Serbian journalists.

Some of the recommendations made to the different stakeholders during the conference were: