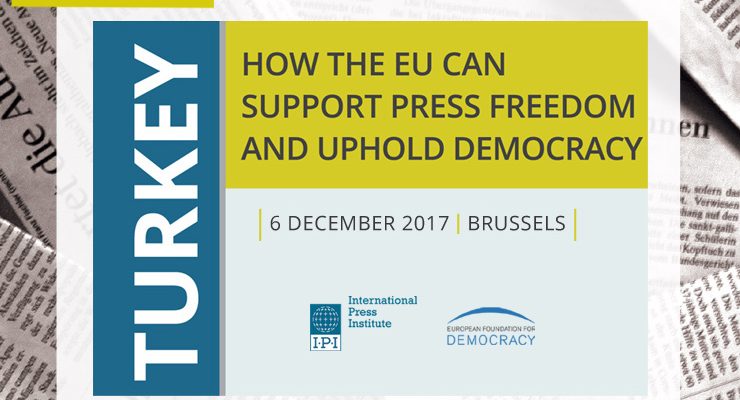 
Turkey: How the EU Can Support Press Freedom ? was the subject of discussion at the European Parliament on 6 December 2017, where three journalists from Turkey spoke about press freedom in the country and how the European Union can help to tackle the situation.

The event was organised by the International Press Institute (IPI) in partnership with the European Foundation for Democracy (EFD) and supported by the Consulate General of Sweden in Istanbul.

As more and more journalists are being imprisoned, the support is needed and it has been clearly voiced by the Greek Member of the European Parliament (MEP) from the Progressive Alliance of Socialists and Democrats, Miltiadis Kyrkos who opened the event by saying that “People in Turkey are not alone and never will be”.

During the discussion moderated by Barbara Trionfi, executive director of the IPI, journalist Selin Girit, Turkey correspondent for BBC News, expressed that the EU must send a clear message to Turkey despite the fact that people in Turkey have lost all hope in the EU. According to Girit, the problem lies in the judiciary and the rule of law which must be pushed by the EU to reform.

The rule of law was also mentioned as a major problem by Nevşin Mengü, freelance journalist and former anchor at CNN Turk, and Özgür Mumcu, academic and columnist for Cumhuriyet. Mengü stated that there is a “witch-hunt” in Turkey, which must be countered with the rule of law as well as with secularism.However, Mumcu argued that dealing with the rule of law is not possible until Turkey’s state of emergency is repealed, as the state is able to issue unconstitutional emergency decrees in this period.

In discussions of press freedom and the rule of law, democracy is therefore also affected. Girit argued that Turkey must address fake news, as this as well as pro-government media do not allow the voices of the opposition to be heard.

Financial solutions were also raised. Girit recognised that media owners are part of the problem, as they are business-owners whose businesses are at risk from governmental actions. However, the EU could follow up on the money it gives to Turkey – this money could be used to support the rule of law and independent journalism. Kyrkos agreed, that cuts to funds are not useful but rather that these funds need to be channeled to civil society.

In terms of EU actions, Mengü argued that it is better if this takes place in internal negotiations between the EU and Turkey, as public statements from the EU are often spun by the Turkish government to make the EU look like the “bad guy”.

The event concluded by audience members reassuring journalists that they are not alone and that organisations and MEPs are pushing to help them. Kyrkos recommends an open letter be written after the event, so that MEPs as well as individuals from other organisations can express their opinions and pressure for EU actions and show solidarity to prosecuted journalists in Turkey.

The European Federation of Journalists is committed to press freedom, with the project #JournalismIsNotACrime monitoring the imprisonment of journalists and working for their release as well as for freedom of expression more generally in the country.