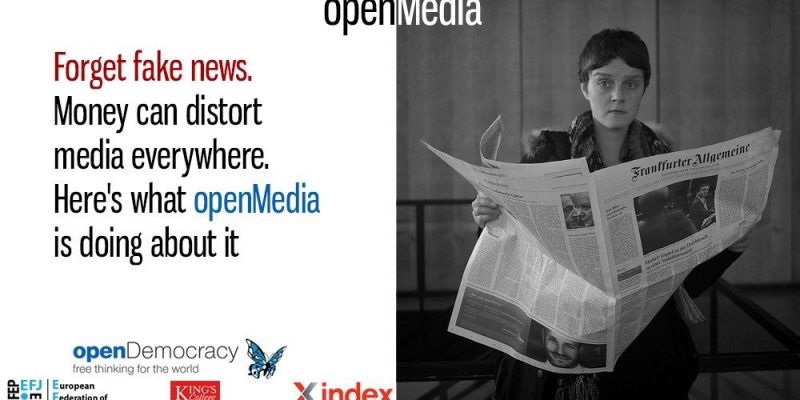 
The recently launched openMedia project aims to investigate and expose commercial interference in editorial decisions. The project is run by openDemocracy with the European Federation of Journalists (EFJ) as a partner alongside the Index on Censorship and King’s College London.

The project believes that there has not been enough of a concerted, ongoing spotlight on the extent and effects of commercial influence over the media, despite the dangerous consequences it poses for press freedom. For now, the project focuses on 47 countries across Europe but also has ambitions to expand.

Despite the recent launch, the project is adamant that it is not a response to the “fake news” hype of the past year or so. Rather, the project responds to scandals of commercial sponsors influencing media content; for example the Daily Telegraph’s suppression of investigations into its advertiser HSBC; and allegations that Buzzfeed deleted articles which advertisers found unfavourable.

According to the project, this power dynamic can suppress investigations of banks, pharmaceuticals, agriculture, fossil fuel giants, energy companies and other big businesses.

In addition, the project recognizes how for many readers, “sponsored content” is difficult to distinguish from genuine news content. The project therefore aims to clarify the commercial interests apparent in media to readers, and as part of the project, King’s College London will develop digital tools to help readers be better informed about news sources.

The findings of the project will be used to campaign for greater transparency and press freedom in news organisations and to empower journalists to advocate for transparency.

In order to do this, openMedia is currently conducting a confidential and anonymous survey of journalists across Europe, asking about their own working practices and experiences of commercial pressure inside newsrooms. The survey is available in English here and in eight other languages here.