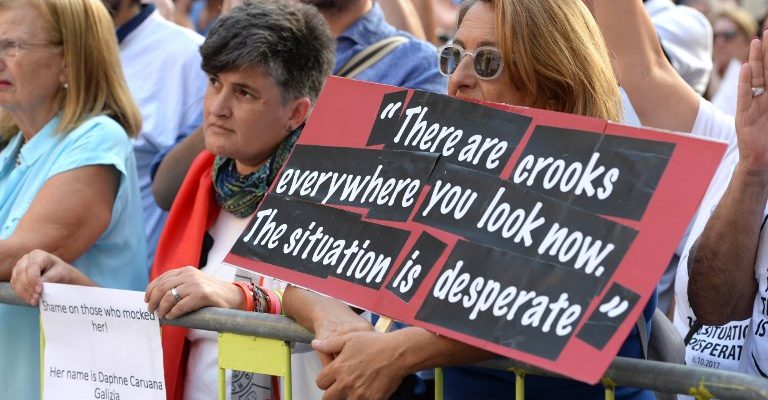 
A European delegation of representatives from the various political parties of the European Parliament has released on Thursday the report from its mission to Malta, on 30 November and 1 December 2017. The delegation met Maltese journalists, the police commissioner and the attorney general of Malta, to discuss important issues affecting the rule of law in the country – including the state of the media.

Maltese journalists from the Times of Malta, the Malta Independent and The Shift News were greeted by the delegation. The journalists highlighted legal challenges facing journalists, including libel cases, which are easy for the accusers but expensive and tedious for the journalists accused. As well as libel, journalists face defamation penalties and frequently self-censor their work, especially when reporting about corruption, due to the fear of threats by those implicated in the corruption.

The ownership structures of the media were also mentioned, as some private media outlets are owned by political parties and public service broadcasters are under government control.

Following up on Ms Caruana Galizia’s case, the delegation met with police commissioner Lawrence Cutajar. When asked by members of the delegation whether effective protection was given to Ms Caruana Galizia before the murder, given the history of barriers, risks and threats she faced, Cutajar responded that it would have been intrusive to implement such protection against her will.

As well as focusing on the media and the rule of law, the delegation also met with the attorney general of Malta to discuss the lack of investigations into individuals implicated in the Panama Papers.

The delegation underlined that the rule of law in the Member States, whether it is Malta or any other EU country, is of great concern to all: “The rule of law is a matter of collective security. The brutal assassination of Daphne Caruana Galizia was aimed at instilling fear in everyone, especially those involved in investigating and prosecuting cases of money laundering and corruption.”

The full report is available here