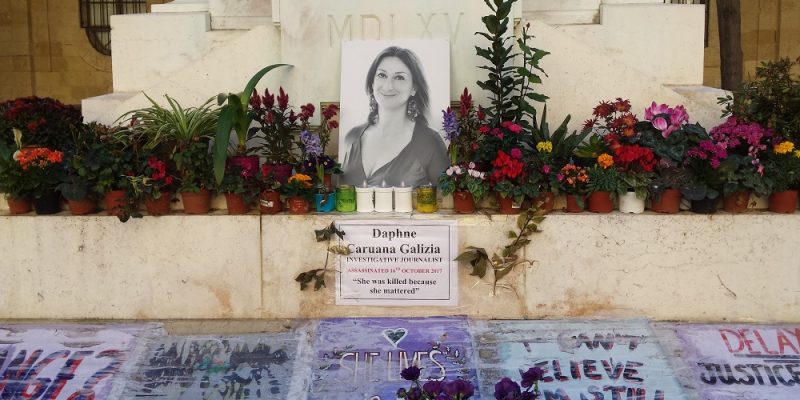 
The European Federation of Journalists (EFJ) is pleased to be an official partner of the discussion “Assassination of Daphne Caruana Galizia – Demand for Close International Scrutiny”, held today in Strasbourg as a side event to the Parliamentary Assembly of the Council of Europe (PACE).

Three months to the day after Daphne Caruana Galizia’s assassination, MPs Anne Brasseur (ALDE, Luxembourg), Pieter Omtzigt (EPP, Netherlands) and Frank Schwabe (SOC, Germany) announce an event to be held in her honour on the margins of the winter session of the Parliamentary Assembly of the Council of Europe today in Strasbourg. The cross-party group of MPs will host Daphne Caruana Galizia’s three sons, Matthew, Andrew and Paul Caruana Galizia, who will talk about the context that enabled their mother’s assassination, the most important strands of her investigative work and why the ongoing investigation into her assassination demands close international scrutiny.

Daphne Caruana Galizia was Malta’s most prominent journalist. A household name in the country for three decades, she was best known among fellow journalists internationally for her Panama Papers reporting. Her most important investigative work uncovered corruption at the highest levels of Malta’s government, and its links to authoritarian regimes. Her assassination in a car bomb attack a few metres from her home in Malta sent shockwaves around the world, raising concerns internationally about the rule of law and corruption in the Mediterranean island where she was born and worked.

The crime and corruption Daphne Caruana Galizia uncovered and the investigation into her assassination demand the immediate and continuing attention of the Parliamentary Assembly of the Council of Europe, including through the appointment of a special rapporteur to shed light on the broader aspects surrounding the crime and to monitor the ongoing murder investigation.

Read here our joint statement on the issue.