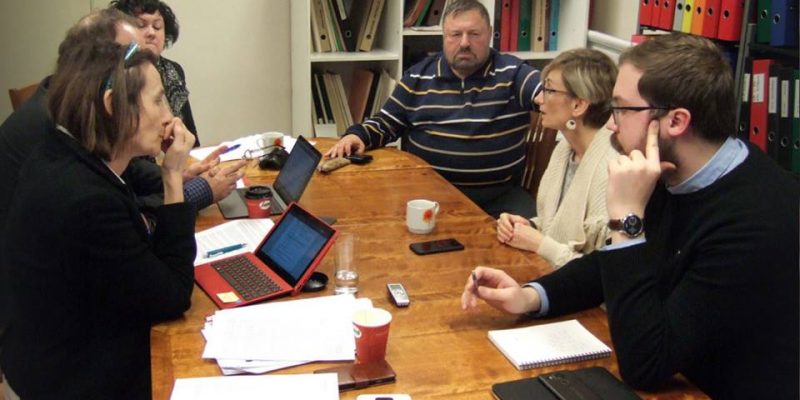 
The European Federation of Journalists (EFJ) and the European Centre for Press and Media Freedom (ECPMF) concluded their Fact-Finding Mission to Estonia, 22-23rd January 2018, by noting that in comparison with many other Eastern European countries,  media freedom in Estonia is rather high. However, the complete deregulation of the media has led to  high media concentration and a negative impact on quality of the media. Many journalists are, as in other countries, replaced by  ”media content providers” who are only valued for their speed and quantity to churn out content in order to reach profit goals.

Managing director of ECPMF, Lutz Kinkel, said: “I am amazed by two things: firstly, how specific and striking the difference is between ‘media workers’ and journalists, and secondly, how low fake news is rated among the level of threats to journalism in Estonia.”

EFJ director Renate Schroeder said: ” Young well educated journalists who feel like automated content providers easily replaced by machines is indeed a problem of journalism today. While I have been impressed by the overall support for self-regulation keeping many journalists in the profession and giving them some tools to resist increasing pressures, the issue of self censorship and merging of advertising and journalism is a major challenge. Schroeder pointed out the lack of will among politicians to even discuss support systems for quality journalism. In Estonia, journalists are not regarded as creative workers but as business with no appreciation for the concept of  forth pillar of watch-dog essential for democracy.

EFJ Vice President Nadezda Azgikhina said: “Due to strong competition and high media concentration and lack of state support, journalists’ integrity is greatly challenged in Estonia and the lack of solidarity or union activism an additional challenge.

The mission was coordinated alongside EFJ affiliates, the Estonian Journalists’ Association (EAJ). Helle Tiikmaa, president of the EAJ, said that the importance of the visit was firstly to remind Estonian media owners, journalists, politicians and researchers that, although media freedom is perceived as being high, this is not the reality if it is not being constantly secured and valued.

“We have been living next to some problems like Russian propaganda and fake news for decades, while large parts of Europe are just acknowledging the problem now. For us it has been an everyday struggle, not a new crisis,” said Tiikmaa.

“In a small society with a small media market, all things good and bad are more visible than in larger ones – like devaluing journalism into click-bait. Whilst the political pressure as such is not really a problem, in this small society there are specific subtle attempts to “domesticate” journalists. I also hope the visit helped to remind our journalists of the need of solidarity amongst themselves” she concluded.

The mission then went to Lithuania. Another EFJ- ECPMF PR follows as well as the final report with some recommendations for both countries.