Joint mission to Serbia: our recommendations 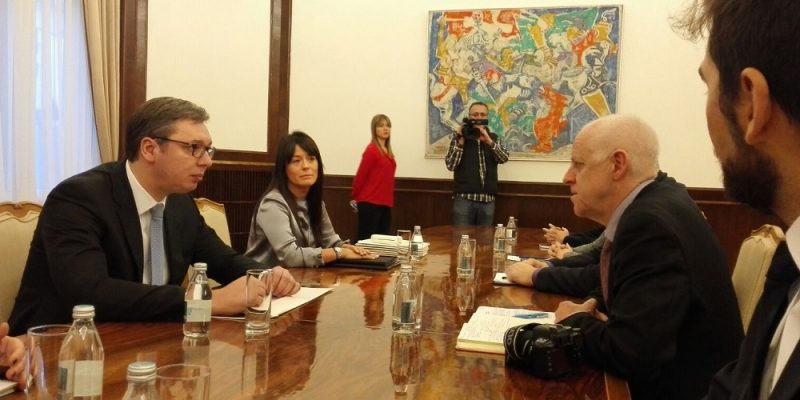 
Following concerns about the state of media freedom in Serbia expressed by both Serbian journalists and media organisations as well as international organisations and institutions, an international joint fact-finding mission comprised of representatives from the European Federation of Journalists (EFJ), the International Press Institute (IPI) and the South East Europe Media Organisation (SEEMO) visited Serbia from 18th-19th January 2018.

“It was encouraging to follow the big interest in Serbia on our fact finding mission. Without any doubt our mission shows that there are a huge need of creating an environment where all journalist by decent working conditions can do their job freely without threats or fear”      Mogens Blicher Bjerregård

The joint mission met and interviewed a large number of stakeholders, including journalists and editors from a wide spectrum of print, broadcast and electronic media outlets; academics and civil society actors; and Serbian government officials, most notably President Aleksandar Vučić.

The mission, which attracted significant media and official interest, revealed a number of substantial challenges for the promotion of a free, independent and pluralist media environment in Serbia.

1. Safety
All authorities should take cases of violence and harassment reported by journalists seriously by providing immediate reactions underscoring the need for a quick resolution of the case based on an efficient, impartial investigation. The Serbian government must undertake efforts to resolve past cases of violence against journalists, which is important not only for the journalists targeted in those cases and their families, but also for the fight against impunity. In general, we strongly recommend that officials at all levels of government in Serbia send a clear signal – without any conditions – condemning all attacks on journalists.

2. State engagement with media
Numerous journalists and editors interviewed by the mission expressed concern over what they described as an increasingly difficult environment for critical journalism, driven in part by hostile official reactions to criticism and investigative journalism in particular. Serbian government officials at all levels must refrain from actions, including verbal harassment, that have the effect of delegitimising critical journalists and their work. Officials must send clear signals that journalists have a right to investigate the activities of those in power.

Serbian officials at all levels must also demonstrate respect for media pluralism and media independence. Officials should adopt a non-discriminatory approach to media interaction, engaging with all media outlets on a fair basis. Public funding schemes for media – especially at the local level – must be carried out in a transparent and independent manner and in line with established criteria.

3. Media strategy
We urge the Ministry of Culture to ensure that the public consultation of a new media strategy takes place in a transparent and visible way both offline and online as well as across the country. There must be sufficient time for ensuring debate on the proposal and there must be a proper call for interventions and amendments as well as serious considerations of any such interventions and amendments. The views of those who left the working group must be acknowledged.

4. Social dialogue
In the view of the EFJ, decent working conditions through collective agreements are a prerequisite for journalists to do their job. In this vein, the EFJ urges an improvement in the field of social dialogue, or its introduction where it is missing. The EFJ states that there is a great need for the building of an infrastructure with functioning organisations and institutions, which should be supported by capacity building programmes.

5. Access to information
State bodies must respect journalists’ right to access public information and must respond to such requests in a timely manner. Extensive waiting times for documents have a serious negative impact on journalistic work in practice.

6. Ombudsman
We recommend classifying journalism and media as a special issue for the institution of the national ombudsman – an independent government body tasked with promoting and protecting citizens’ rights – so as better to allow her or him to deal with complaints and issues regarding journalism and media.

7. Definition of a journalist
So as not to limit press freedom and so as to uphold the protecting of sources, the joint mission warns both media stakeholders and the authorities against the introduction of a special definition on who is a journalist by narrowing the present understanding.

8. Working group on safety
The international mission views the formation of the working group on journalist safety as an important signal of Serbia’s intention to seriously tackle the problem of safety. In this light, we urge the group’s members – representatives of the media, police and the public prosecutor’s office – to enter into a dialogue intended to revitalise this important effort, if needed with support of an independent moderator. Mutual understanding is critical to achieving concrete progress.

9. Press council
We encourage all media outlets and journalists to join Serbia’s Journalism Ethics Code and to respect the self-regulatory body, the Press Council including the Council’s Complaints Commission, and to publish the Council’s decisions in accordance with its regulations. We view the Press Council as a critical instrument to raising ethical and professional standards of journalism in Serbia. National and international institutions should offer their full support to this body.

We urge all media, media associations and journalists in Serbia to respect at all times the professional and ethical standards in their work and daily communication.

It is our view that fulfilling these recommendations, which are joint unless indicated otherwise, will contribute to a better environment for journalism in Serbia, one in which journalists can do their jobs – including investigations into the activities of those in power – without harassment, attack, threats or smear campaigns.

We also emphasize that when free and independent journalism thrives, democracy thrives.