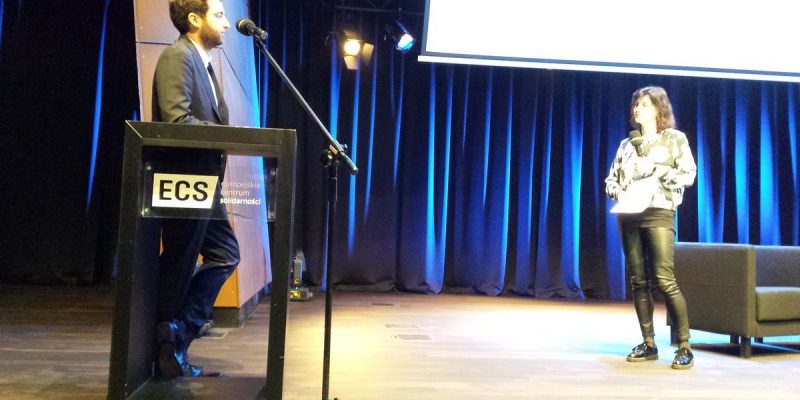 
This is the keynote speech given by Matthew Caruana Galizia, Pulitzer prize-winning journalist at ICIJ, at the conference “Free European Media” which took place in Gdansk, 15-16 February 2018.

What are ethics? What is self-censorship?

My father, brothers and I spent our first Christmas without my mother together, in a cottage
hidden away in rural England. We cooked, played Monopoly and watched cowboy films by
Sergio Leone. It reminded me why my mother liked them so much- her first regular column
was called The Good, the Bad and the Ugly.

In life, like in these parables disguised as films, there are the good guys, the bad guys, the
not-so-bad guys and the guys who stand around in the background doing nothing. My
mother liked to say that the word ‘choices’ co-habits with the word ‘decisions’ and that it is
these two things which, over the long term, define us and whether we are good, bad or a
waste of space.

Often, these are decisions that have to be made in the blink of an eye and your choice will
set the course for the rest of your life. There are the decisions made under the table: the
decision to accept or reject a bribe. The decision to offer a bribe.

There are the decisions made in the newsroom. The decision not to publish a story because
it might put you in danger. Or the decision to cave in to your editor’s demands that you kill a
story, exchanging your dignity for the security of next month’s paycheck.

Then there are the decisions that are made in the boardroom. This is important because we
often forget that it takes two to self-censor. There was the decision by Henley & Partners,
the Swiss company that sells Maltese passports, to harass my mother with constant legal
threats. Or the private bank that filed defamation suits against her in the US, for millions of
dollars, in an attempt to stop her writing by bankrupting her.

For every act of self-censorship by a journalist, there’s a politician or a business out there
putting pressure on them to change their story and to rob their readers of the right to know.

A few months before my mother was assassinated, a cabinet minister in my country’s current
government obtained an illegal court order for her bank accounts to be frozen. My mother
chose to continue reporting despite this pressure to self-censor, and more so after she
uncovered evidence that the prime minister was coordinating a campaign of lawsuits against
her, hand-in-hand with the corporate interests that she had reported on.

In my mother’s own words:

It’s an extremely difficult situation, but 30 years of trying to bulldoze me into the tarmac
haven’t worked for no reason other than my character traits. It is the nature of my personality
to think in terms of “Do your worst, until the only option left to you is to take out a contract on
my life. Let’s see where your obsession takes you.” But this is not learned. You are either
that way, or you are not. And living like that shapes your life in a way that few people can
handle, which I understand completely. Without a fighter’s personality, I would have stopped
writing for the newspapers in 1991 already.

Others did not have the strength or the sense of purpose and civic duty needed to do what
she did. They capitulated at the first sign of a threat.

We have to let journalists in that position know that they don’t have to self-censor, that within
the international community of states and organisations, they have allies who will give them
the backing that they need.

A board member of the Association of Polish Journalists came to this conference to defend
Poland’s new censorship laws. Members of the audience chose to speak out against this
outrage instead of remaining silent. Now we must tell Polish journalists that when the
censorship law comes into force three months from today, it is their duty to break it, and that
the international community will back them in doing so.

Let’s see the government of Poland attempt to arrest one of you for breaking the censorship
law. If they do, they’ll be making fools of themselves. If they don’t, then the law is defeated.
I was only ever asked to censor my work once. I confronted my editor about it, published
anyway, then resigned. My colleagues did the same thing. We did it even though we had no
new job lined up- it simply felt as though it was the right choice to make. One of my biggest
regrets is that I never told my mother what example instructed me to do this.

I must have been about nine or ten years old. It was before the Internet became widespread
and my mother would type out her opinion column on an Amstrad computer, print it and
deliver it to the newspaper’s offices. On one of these deliveries my brothers and I happened
to be sitting in the back of the car. My mother parked, walked across the road to the
newspaper building, manilla envelope in hand, and disappeared into the doorway. After a
long wait there was lot of noise and she came storming out, pursued by her editor, who was
red in the face and in a complete panic.

The printed column that she held in her hand was about the ethical failings of a politician
who happened to sit on the newspaper’s board of trustees. The editor refused to publish it,
and my mother resigned on the spot. No one ever told me this or explained what
happened- I was only nine- but I understood instinctively what my mother was doing and
why.

I’ll never know whether she did that on purpose, to teach my brothers and I a lesson, or
whether it was an accident that we were there. Either way, the point is that these things have
to be taught, witnessed, demonstrated and told. If they aren’t then there’s no model and
there are no standards.

Tell stories of ethical and unethical behaviour, talk to each other about self-censorship and
do not sacrifice your dignity or betray your readers. Set the bar high for yourself and your
trade, set standards and hold yourselves to them. Learn from the examples set by others
who’ve been there before you.

“Without a fighter's personality, I would have stopped writing for newspapers in 1991“ Daphne Caruana Galizia, used to say. @mcaruanagalizia shared the example of her mother as the keynote speaker on self-censorship at #FreeEuropeanMedia