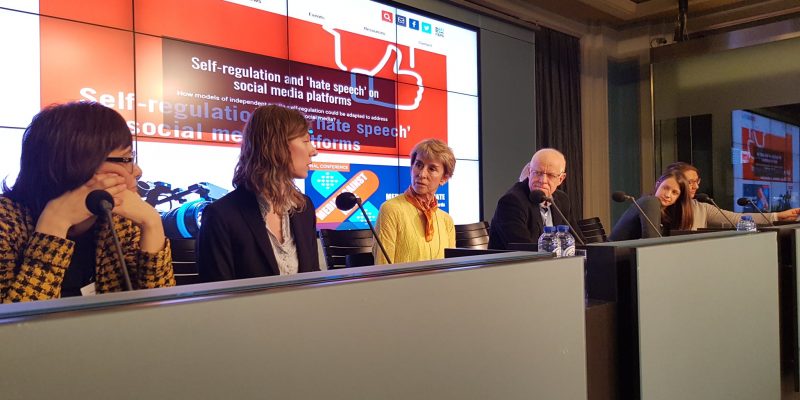 
The European Federation of Journalists (EFJ) held the final conference of the 18-month campaign ”Media Against Hate” to counter hate speech in the media in Brussels, on 5-6 March 2018. The conference was attended by around 60 participants from all over Europe including journalists, community media, media regulators, journalists’ unions, IT companies and policymakers.

Harlem Désir, the OSCE Representative on Freedom of the Media opened the conference with a keynote speech. He emphasised high ethical standards in journalism and effective self-regulation are key to combat hate speech and disinformation in the media. Mr. Désir said, ” This is a challenging time for journalists…the best answer against online hate speech is not censorship but ethical journalism.” He further warned that bad law regulating hate speech could be easily abused and used to curb media freedom.

During the panel on “How to combat hate speech while preserving freedom of expression?”, it raised concerned over the increase of legislation on hate speech and its impact on media freedom. Louisa Klingvall from the European Commission DG Justice explained the recent Commission Communications on regulating illegal online hate speech and content and the Code of Conduct signed among IT companies and social media platforms. She emphasised that the Commission makes sure such regulation will not have an impact on the freedom of expression.

Clara Sommier, a representative of Google explained what regulations YouTube, one of its subsidiaries, uses to combat hate speech and ensure that they respect media freedom. She explained that Google employ both technology and humans to detect illegal content. According to her, the company cannot only rely on technology because only regularly trained humans can take into account a variety of languages and cultures. Regarding long-term solutions she proposed more digital literacy.

Alison Bethel McKenzie, Executive Director of the Professional Society of Journalists from the United States, spoke of her experience in the US and Africa when journalists are the subject of target on hate speech. She explained that in the US, it is difficult to take legal action against hate speech and journalists cannot protect themselves. She called for media organisations to do more to protect journalists who are targeted by hate speech.

Iva Krtalic, Commissioner for integration and intercultural diversity in the German public broadcaster, WDR, stated it is crucial to not allow a normalisation of extremist opinions in the public discourse. The normalisation of hate speech in the public sphere has become more and more normalised in recent years which she sees as one of the biggest problems in Germany. Furthermore, she noted that media organisations are not readily equipped to deal with the issue of hate speech. There is a need for widespread measures to protect journalists.

All panel speakers agreed journalist organisations and associations should play an ever more important role to protect journalists and promote ethical journalism.

The conference also showcased the five winners of the ‘Media Against Hate’ video contest from Austria, Poland, Greece, Italy and the Czech Republic. The five winners shared their personal stories about how their daily work helps fight discrimination and counter hate.

During the concluding panel “What is the way forward” the threat of tabloids and increased tabloid reporting instead of quality journalism was addressed. Speakers emphasised the necessity of credible journalism, showing the reality and background of complex issues in order to explain how propaganda influences people and how politicians are using hate speech for their own agenda. The panelists called for more cooperation among all media stakeholders, including journalists, community media and media organisations to restore trust in the media.

Mogens Blicher Bjerregard, the EFJ President concluded the conference saying, ” This is a critical time and we need critical minds from both journalists and citizens.” He thanked the European Commission, DG Justice for funding the project and the partners of the project ARTICLE 19, The Croatian Journalists’ Association (CJA), Community Media Forum Europe (CMFE), COMMIT, Cooperazione per lo Sviluppo dei Paesi Emergenti (COSPE) and the Media Diversity Institute (MDI).