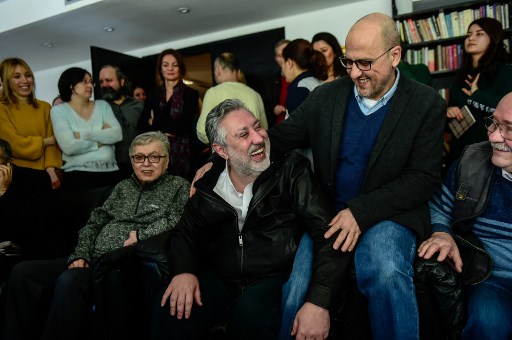 
On Friday 9 March, A Turkish court has released on bail two journalists who were held for over a year on terror-related charges. The editor-in-chief of the opposition Cumhuriyet newspaper, Murat Sabuncu, and the investigative reporter, Ahmet Şık, were both released on bail but they remain charged while the chairman of the newspaper, Akin Atalay, was kept in detention. The staff from the newspaper were held as part of the crackdown that followed the failed coup of July 2016.  Based on articles published by the newspaper, Turkish authorities accuse Cumhuriyet of supporting the Gülen movement who Ankara believes headed the coup attempt, as well as the Kurdistan Workers’ Party (PKK) and the ultra-left Revolutionary People’s Liberation Party-Front (DHKP-C), all three considered as terrorist organisations with conflicting interests.

The EFJ warmly welcomed the released of the two journalists and is demanding the release of the chairman as well as charges being dropped against all the defendants. EFJ affiliates in Turkey (TGC, TGS and DISK Basin Is) were closely following the hearing and showing supports with imprisoned journalists.

Speaking after his release, Murat Sabuncu said their release was not a reason to be happy, since several journalists remained in prison.”We should not be happy that we have been released because our release does not mean things have changed in Turkey regarding freedom of speech,” Sabuncu told reporters. Şık reiterated Sabuncu’s comments, saying he would rather see anger than happiness. “I am not happy in any way. I don’t want you to be happy while Akın Atalay is still inside. I would prefer if you were angry, for anger will keep us standing,” Şık said. “Today is not a day for us to be happy, but there will come a day when we will be happy in this country,” he added.

OSCE Representative on Freedom of the Media Harlem Désir recalled that in over one year the investigations failed to prove any of the extreme charges the journalists stand accused of, and that they continue to face up to 43 years in prison if convicted, for charges including “being a member of an illegal organization” and “aiding an illegal organization while not being a member”.

“I also urge to revisit questions related to the independence of the judiciary and its ability to protect freedom of expression as a constitutional right, and the issue of the right of defendants to a fair trial,” he said. “In this light, the related rulings of the European Court of Human Rights will be most urgent and important.”

The next hearing on this case is scheduled at Silivri on the 16th of March 2018.