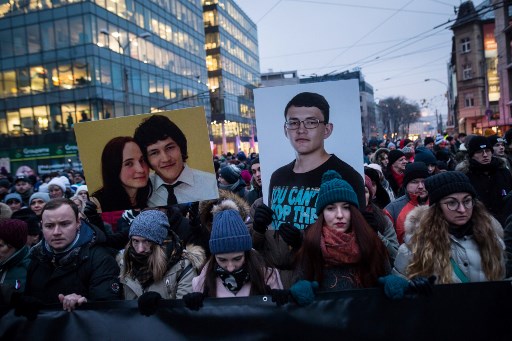 
The European Federation of Journalists (EFJ) joined 61 civil society organisations on 13 March 2018 in a letter to the European Parliament calling for stronger safeguards for journalists and citizens who exercise their right of access to information in the wake of murdered Slovakian journalist Ján Kuciak.

The statement was sent to all 751 Members of the European Parliament in preparation of a plenary debate on “Protection of investigative journalists in Europe: the case of Slovak journalist Ján Kuciak and Martina Kušnírová” in Strasbourg on 14 March 2018. The letter underlines the importance of the right to access to information in fighting corruption, investigating human rights violations and protecting the rule of law. The letter was initiated by the human rights organisation Access Info Europe.

Dear Member of the European Parliament

In advance of tomorrow’s parliamentary debate on the killing of Slovak investigative journalist Jan Kuciak, please find below a statement signed by 61 civil society organisations from across Europe and elsewhere expressing their concern about the fact that his investigation may have been exposed after he submitted request for information, and calling on the European Union to take action to help protect journalists and all those who exercise their fundamental right of access to information.

More details can be found in this story by the Organised Crime and Corruption Reporting Project:

Statement by journalism, media freedom, right to information, human rights and other organisations

In light of the shocking news that Jan Kuciak was likely killed as a result of his work as an investigative journalist and whose freedom of information requests may have been passed to the subject of his inquiry, we the undersigned, are calling on the EU for immediate action to safeguard journalists exercising the right of access to information.

With the second killing of a journalist in Europe in less than six months it is evident that urgent action must be taken to ensure the protection of civil society exercising fundamental rights.

The right of access to information is an essential tool for fighting corruption, for investigating violations of human rights, and for protecting the rule of law.

We condemn any actions by public authorities that puts in danger those who exercise this right.

We have identified numerous instances from across Europe of public authorities passing on the names of journalists and other information requesters to third parties. The absence of specific laws and policies that proscribe and sanction such breaches is a matter of grave concern. The identity of requesters should only ever be revealed where there is a clearly justified overriding public interest in doing so.

We the undersigned organisations therefore call for on the European Union take urgent action to ensure strong protections for the safety and integrity of journalists and all those who exercise the right of access to information.

Specifically, we call for actions that will guarantee:
»  An environment in which the right of access to information can be exercised without fear;
»  A strengthening of the legal framework across European countries, including specific measures that ensure that the identity of the requesters is safeguarded.

A list of all parties that signed the letter can be found here.