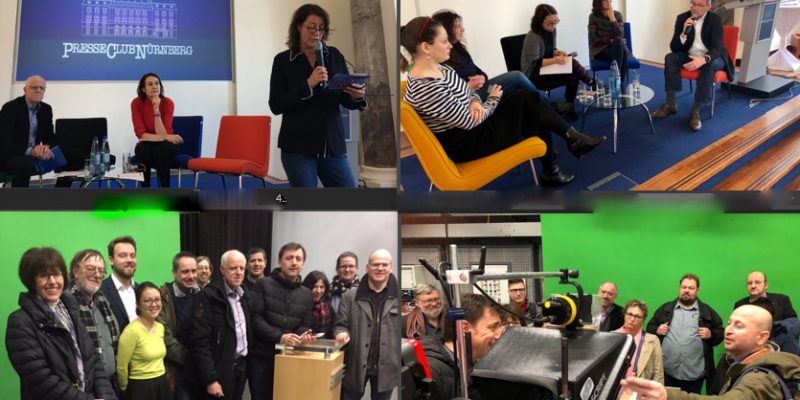 
36 journalists, union leaders and media experts from 20 European countries discussed issues around new business models and trends in (digital) journalism from 15-16 March 2018 in Nuremberg, Germany. With great enthusiasm participants explored recent trends in journalism,  successful new models in financing journalism and the role of unions and associations to best serve their members in this process of change.

The first panel “What is trending in journalism” included academics, publishers and an editor in chief from a local newspaper, all giving interesting insights in changes in the media eco-system,  its impact on the work of journalists, use of automated content and challenges on disinformation.

Martin Schwarzkopf, editor-in chief of the daily newspaper Main-Echo, stressed the importance of continuous training for journalists acknowledging the challenge but also expressing his optimism for the future of quality journalism.

#changingmedia @BJVde Martin Schwarzkopf editor in chief of daily main-echo says: new media possibilities are an enrichment for journalists. But it is also a hard process to cope with the requirements pic.twitter.com/nEDvdOKBVR

Against a background of shrinking newsrooms, exploding number of precarious working conditions among journalists,  a sense of optimism prevailed throughout the workshop, not only in this first panel. Journalists become or want to become active story tellers using new (business) opportunities in reviving a sense of journalism as a public good.

The most exciting presentation and reflecting such optimism  was the presentation of Nadja Schnetzler, co-founder of Republik, online magazine founded on 14 January in Switzerland and based on crowd-funding and subscription.  It is ad-free, independent and must sustain itself.

Other crowd-funding initiatives such as the Swedish Blankspot or foundation supported journalism, other alternative funding models or questions of pay-walls  were discussed in working groups.

A panel on the role of journalists’ unions in how to best service their members highlighted issues around training, innovation, investment, cooperation, protection and social and professional support for  an ever more diverse journalists’ community.

Take digital seriously tips from @nvj on how to respond to change #ChangingMedia pic.twitter.com/WHCToTkQTl

#changingmedia @DJVde DJV Vice President Wolfgang Grebenhof on media future: “We as unions should focus more on being thinktanks. We have to develop ideas and Channelize them. I am positive that we find good solutions” pic.twitter.com/7TJrWjKe2E

#changingmedia @EFJEUROPE We must be ahead of developments and none of our affiliates should keep behind, says EFJ president mogens bjerregard concluding the results of the EFJ workshop change in Media in Nuremberg pic.twitter.com/Ptb449Mb26

On the second day, the meeting was hosted by the ARD-ZDF Akademie, the public service training centre for journalists and media workers.

The workshop, which was co-organised by the Deutscher Journalisten-Verband (DJV)  and its regional member, the Bavarian Association of Journalists (BJV),  was the first event of a  series of workshops, under the umbrella of  the EFJ Project on Managing Change in the media which has the support of the European Commission and is in partnership with the European Broadcasting Union (EBU)  and News Media Europe (NME).