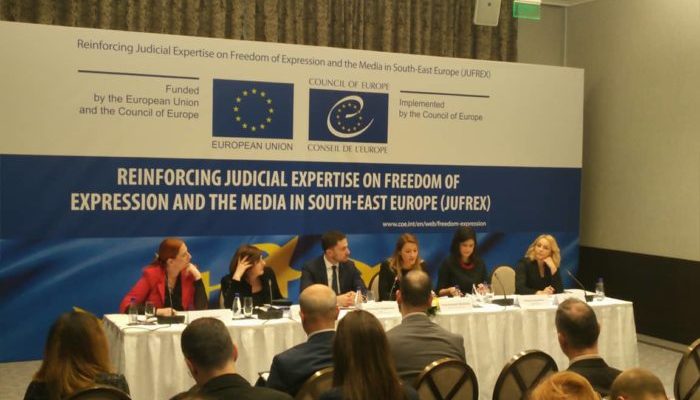 A group of independent experts carried out a detailed analysis of the Montenegrin media sector from August 2017 until January 2018. Representatives from the EFJ’s Montenegrin affiliate, the Trade Union of Media of Montenegro (SMCG) were consulted for the investigation.

The report found that the private Montenegrin media had failed to engage with the SMCG about a collective agreement prepared by the national journalist trade union a year ago.

The EFJ backs the recommendation addressed to private media in Montenegro to start negotiating the collective agreement with SMCG in order to improve the precarious working conditions of journalists working in the country.

During the presentation of the report representatives of the inquiry stated:

It is necessary to strengthen the independence and efficiency of regulation, strengthen self-regulation and the application of professional standards and provide a safe environment for journalists in order to be able to do their job.

The need for Montenegrin authorities to take action to ensure a safe environment for journalists was underlined by the recent car bomb attack on Montenegrin journalist Sead Sadiković on 1 April 2018.

Trade Union of Media of Montenegro (SMCG) expresses its great concern regarding the activation of the explosive device in front of Sead Sadikovic’s home in Bijelo Polje.https://t.co/p0w16BK1v2

In line with an analysis of the Law on Electronic Media and the Media Law in Montenegro by SMCG from December 2017, the report recommends the creation of legislative mechanisms in order to ensure editorial independence and legal protection of journalists.

Further recommendations of the report include:

Marijana Camović, president of the Trade Union of Media of Montenegro (SMCG), took part in the consultation:

“We at SMCG are very satisfied with the results of this research that largely confirms everything that we regularly point out. Independent foreign experts have noticed a lot of bad points in the Montenegrin media, but also in the way that the state has set itself up on these topics and in the laws. The Media Law is being amended now, and we hope that this analysis will direct the working group towards good solutions.”