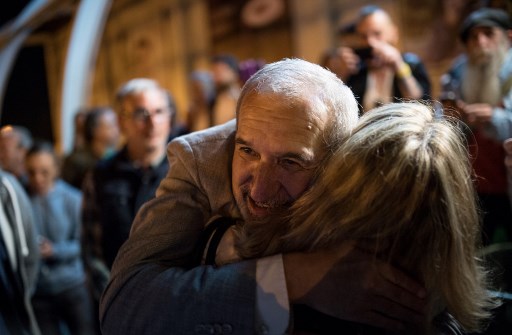 
On Wednesday (25/05/2018), the court in Silivri (Turkey) severely convicted 13 journalists and executives from the opposition newspaper Cumhuriyet to jail sentences between two to eight years. The court is convinced that editorial policy changes adopted by the newspaper were aimed at helping multiple illegal terrorist organisations in Turkey. All the defendants have been released pending the confirmation of the jail sentences by the upper court. The judge also ordered the release of Cumhuriyet chairman Akin Atalay who had been in jail for 532 days until yesterday. “As we always say they cannot intimidate Cumhuriyet newspaper which will continue to tell the truth to its readers,” he said after being released.

“No penalty can stop us from doing journalism. If needed, we will go to prison again but we will continue to do journalism,” said the editor-in-chief Murat Sabuncu. Following the ruling, Cumhuriyet reporter Ahmet Şık said : “No dictatorship in history has been able to win the war to silence those who are in the right.”

“In this case, journalists are accused of doing journalism and the self existence of Cumhuriyet is perceived as a crime by the authorities”, said the lawyer Fikret Ilkiz.

The European Federations of Journalists (EFJ) strongly condemns the decision of the court. “It is once again an attack against prosecuted journalists and a clear intimidation strategy have chilling effect on press freedom in the country in the wake of new elections. We stand by our colleagues at Cumhuriyet who are ready to continue their profession with the support of the public opinion and despite the crack down”, said the EFJ.

Photo Credit : Cumhuriyet chairman Akin Atalay hugs friends after being released from Silivri prison, in Silivri, outside of Istanbul, on April 26, 2018. A Turkish court on April 25 convicted journalists from the opposition Cumhuriyet Daily newspaper for helping outlawed “terrorist” organisations, but editors remained defiant vowing their “honourable” journalism would not stop. Cumhuriyet — which means simply “Republic” — was set up in 1924 after the Turkish republic was founded in 1923.
BULENT KILIC / AFP