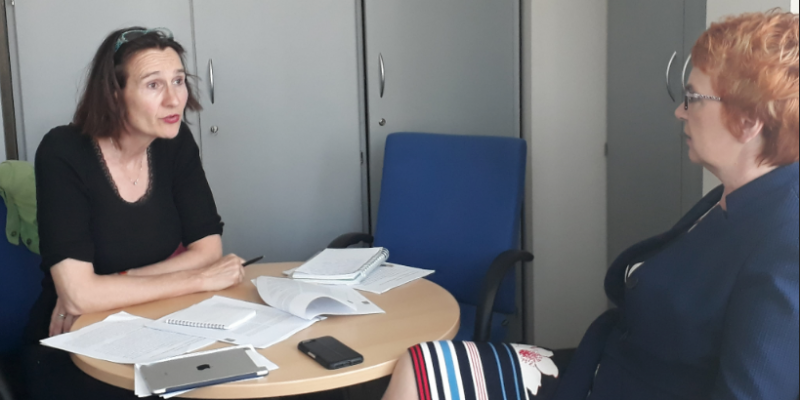 
Following the EFJ-ECPMF fact-finding mission to Estonia and Lithuania, Renate Schroeder, director of the European Federation of Journalists (EFJ) met with the office of Kaja Kallas (ALDE), Yana Toom (ALDE) and the office of Indrek Tarand on 15 May 2018, all Estonian Members of the European Parliament (MEP) to discuss the findings of the report.

According to the mission’s findings, the biggest problem is neither fake news nor Russian propaganda, but the economic pressure on media creating a culture of “clicktivism”. Although journalistic codes of conduct in Estonia are in place and the government refrains from regulating the media market, editorial independence and is a great challenge within the very concentrated media market.

Yana Toom, who used to work as the chief editor of daily newspapers in Estonia, raised the issue of minority languages in Europe.

I recently met Estonian Russian-speaking journalists in the European Parliament who told me they urgently need training and exchange of good practices. There is a lack of support for minority-language journalism.

Renate Schroeder agreed that there is a need to invest in training for journalists who represent minorities in Europe. Funding remains a big problem to produce quality journalistic content for the Russian-speaking minority in Estonia (around 30% of the total population).

Toom appreciated very much the report and in particular the need for training, access to documents and support of Russian-speaking media in Estonia, also as an important fight against disinformation.

There is a great need for improved intercultural dialogue in Estonia and throughout Europe with the Russian speaking communities.

Vadim Polestsuk, parliamentary assistant to Ms. Toom thanked the EFJ for the report and agreed with the great challenges of high concentration,  and blurring between journalism and other forms of commercial communication.

I believe that public relations is the cancer of journalism; the government is spending more money in their own PR than in creating a genuine healthy media landscape.