Broadcasting strike in Norway ends in full victory for journalists 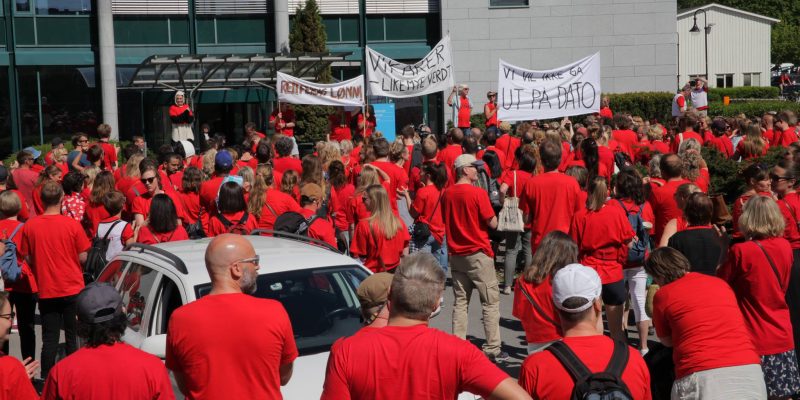 
After negotiations for a collective agreement with the Norwegian Public Broadcasting (NRK), the Norwegian Union of Journalists (NJ) managed to win on all main demands on 23 May 2018 in Oslo.

The 1700 journalist members of the NJ at the Norwegian Public Service Broadcasting NRK had gone on strike on 15 May 2018, after initial negotiations and mediation had not led to a new collective agreement. The public service broadcasting NRK is the largest media house in Norway, with 3400 employees.

After eight days of renewed negotiations workers of the NJ and NRK came to an agreement:

The strike was triggered by the NRK management’s declared aim to fire and replace around 100 journalists every year due to what they claimed as lack of necessary competence. This would affect all senior journalists, in permanent danger to be labeled “outdated”. In the new agreement, NRK guarantees that all journalists will receive competence enhancement and relevant training. Plans for competence building will be discussed with the union representatives annually.

Another important demand was to put an end to unfair working conditions for precarious journalist workers on temporary contracts, like freelances and substitutes. In the new agreement, all temporary journalist workers will be paid after the same wage scale as permanent staff. An agreement from 1990 declares that the pay gap between NRK journalists and their colleagues in the other big media houses shall be reduced and closed. Instead, the gap has widened year after year. The difference was now 110.000 NOK (12.000 EUR) in the average annual salary. The new agreement means the gap will be reduced for the first time in years, with a minimum flat wage rise of 18.100 NOK (1900 EUR) this year, and a guarantee that no one will receive a wage increase of less than 2.8 percent.

Richard Aune, president of the Norwegian Union of Journalists said

The demands for competence enhancement and fair treatment of the temporaries have been crucial for us. I am therefore very pleased that we have got this in place. This strike has shown a massive unity and dedication to the important work our members do around the clock, every day throughout the country. I am very proud of what we have managed to achieve together.

The European Federation of Journalists (EFJ) congratulates its Norwegian affiliate to this great victory.