German journalists strike after fifth negotiation round ends without agreement 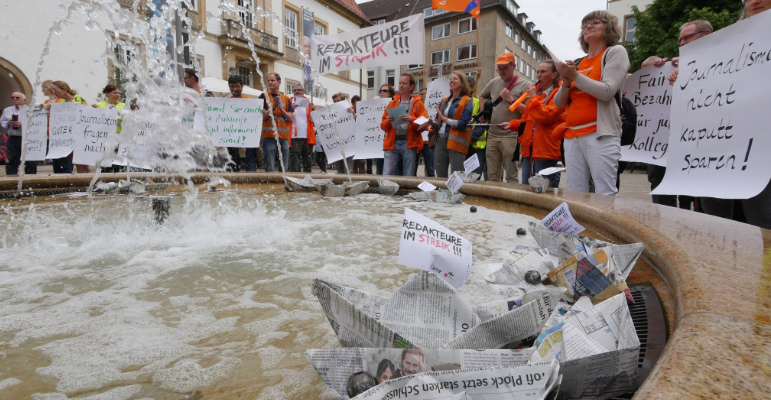 
Newspaper journalists went on strike all over Germany on 28 May 2018 after the fifth round of negotiations for a collective agreement between publishers and two German journalist unions, the Deutscher Journalisten-Verband (DJV) and Deutsche Journalisten Union (dju in ver.di), in Berlin ended without a result.

For the last few months, the DJV and dju in ver.di, the German affiliates of the European Federation of Journalists (EFJ), have been in negotiations with the Federal Association of German Newspaper Publishers (BDZV) to improve the working conditions for around 13,000 editors at daily newspapers. The negotiations were accompanied by numerous warning strikes all over Germany.

During the last negotiation round, the BDZV made the following two offers:

These offers were not accepted by the German journalist unions who demand 4.5% more salary for newspaper journalists and at least 200EUR more pay for young editors. On 25 April 2018 a delegation of about 20 young German journalists together with the DJV and dju in ver.di had met with publishers in Berlin to demand better working conditions which also did not lead to an agreement.

We finally need a presentable result. It is not acceptable that publishers do not even offer newspaper journalists a salary rise that balances the inflation after the collective agreement results in public service and other industries of the private sector – actual wages are needed.

Our colleagues have a right to an income rise above the rate of price increases. The bargaining committe of the DJV is in agreement with the editors that at the end there has to be a pay rise.

The EFJ strongly supports their German affiliates in their negotiations with the publishers. Negotiations will continue on 4 June 2018 in Berlin.

We stand in solidarity with our German colleagues who are currently on strike fighting for fair salaries in the newspaper sector. Journalists who struggle hard under increasing work load to keep up quality and ethical standards in times of change in the media have a right to obtain fair payment. Employers increase offers which do not even equalise the price increases would be an effective loss. This is not acceptable. We therefore support our colleagues in their strong belief not to give up and to keep on with their fight in widespread industrial action.