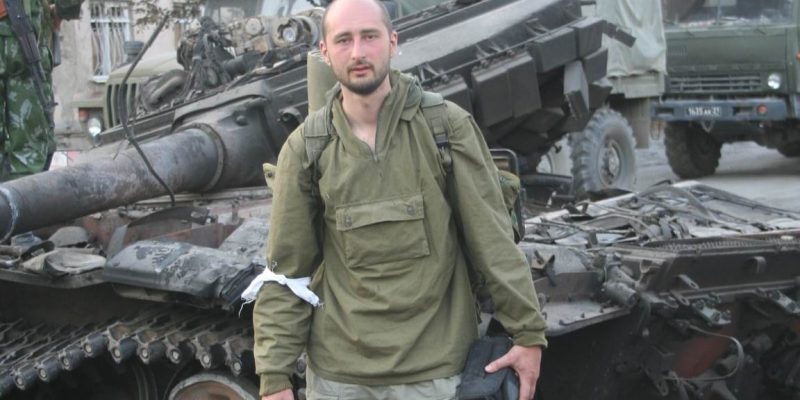 Arkady Babchenko, the Russian journalist who was reported to have been shot dead in Kiev, has turned up alive at a news conference in Ukraine this afternoon. Vasily Gritsak, head of the Ukrainian security service, told reporters the agency had faked Babchenko’s death to catch people who were trying to kill him. The European Federation of Journalists (EFJ) condemns this lie and unacceptable manipulation of public opinion. Whenever subterfuge is used, journalists and media, like law-enforcement officials, have a responsibility to disclose how and why they used it and to justify their actions. The EFJ is not convinced by the so-called justifications of Ukrainian security services.

Russian journalist Arkady Babchenko, 41, who has worked for “Novaya Gazeta” and other independent media outlets, has been shot and killed in Kiev today. His wife found him bleeding at their apartment. He died in the ambulance on the way to the hospital.

Babchenko’s killer was waiting for him in the stairwell of his building. He shot him in the back.

Babchenko was a prominent war correspondent. Last year, he moved to Kiev, where he worked for Crimean Tatar TV station ATR. He left Russia in February 2017, saying he was receiving death threats.

Dmitry Muratov, former editor for the Russian newspaper “Novaya Gazeta”, said the killing recalled the murder of one of Russia’s best known journalists, Anna Politkovskaya, who was killed inside her apartment building in Moscow in 2006.

“We condemn the brutal murder of our colleague Arkady Babchenko,” said Sergiy Tomilenko, President of the National Union of Journalists of Ukraine (NUJU). “We demand that law enforcement officers conduct a qualitative and effective investigation. Unfortunately, this murder occurs in a context of systemic impunity for crimes against journalists in Ukraine. In all cases of murders, or in cases of physical attacks against journalists, there are no precedents of weighty punishments for the authors or the masterminds of these attacks.”

The Russian union of Journalists Secretary, Yulia Zagitova, said RUJ was “outraged by the murder of Arkady Babchenko. Unfortunately, today the death of journalists, as a rule, is connected with the fulfilment of their professional duty. And it does not matter who these journalists are by nationality and what their views are. They are journalists. They extract information. And for this you cannot kill them. We hope Ukraine’s law enforcement agencies will deal with those who are involved in this murder. We express our deepest condolences to those close to us and to everyone who knew Arkady Babchenko.”

“We call on Ukrainian authorities to identify and prosecute the killer and the masterminds,” added EFJ General Secretary Ricardo Gutiérrez, reminding impunity still persists in Ukraine for the murder of another prominent journalist, Pavel Sheremet, who was killed by a car bomb in Kiev in 2016.

Four other journalists have been killed in Europe over the past year: