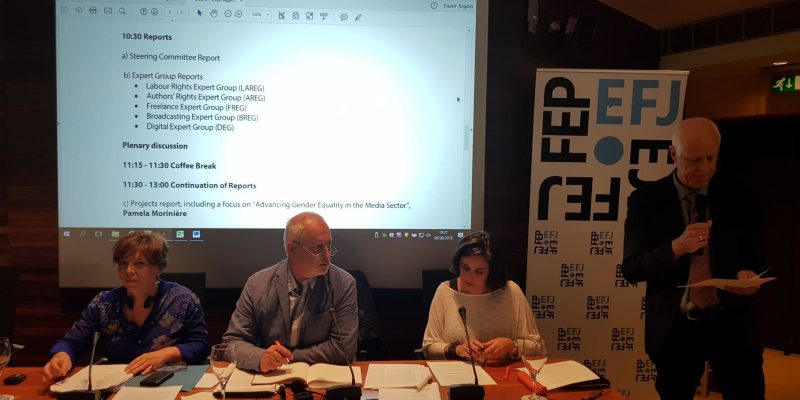 Welcome to the EFJ Annual meeting 2018. For the first time we have our annual meeting in Portugal and it is great to be here, thanks to our Portuguese colleagues to host us.

Being host during difficult times is admirable. You know better than most of us how difficult the time is for our profession regarding precarious work, low payment and dismissals.

I also want to emphasize that it is amazing how your union has been able – not least en terms of relevance – to develop and to meet new demands in very difficult times.

The time is not only difficult, journalists across Europe are facing a more dangerous time than we have seen previously in Europe. Since we met last year in Bucharest, five journalists have been killed and three of them in EU-countries.

Five of our colleagues paid the highest prize just for doing their job. I would ask you to raise and pay those colleagues a minute of silence.

Recently we experienced a very strange situation as the Ukraine authorities faked the murder of the Russian journalist Babchenko. I was shocked – of course happy that he is alive – I cannot see any justification for doing so. I want to stress that it could endanger the work of journalists if the citizens start doubting on the roles of journalists. Suddenly journalists could get targeted as agents, and then it is getting dangerous.

However, the current situation for journalists shows the importance of following up the Council of Europe recommendation on protection of journalists and safety ratified by all member states. Here I would emphasize the good example from Italy monitoring very precisely all attacks, threats and harassments against journalists. Another example is Sweden followed up the UN plan of action for the safety of journalists and the issue of impunity developed mechanisms to support journalists.

For many reasons it is more important than ever that journalist unions and associations across Europe within the European Federation of Journalists work together on safety, promoting better media legislation and decent working conditions. We are going to deal with these topics at this annual meeting.