Young, freelance and female journalists should be the priorities for trade unions 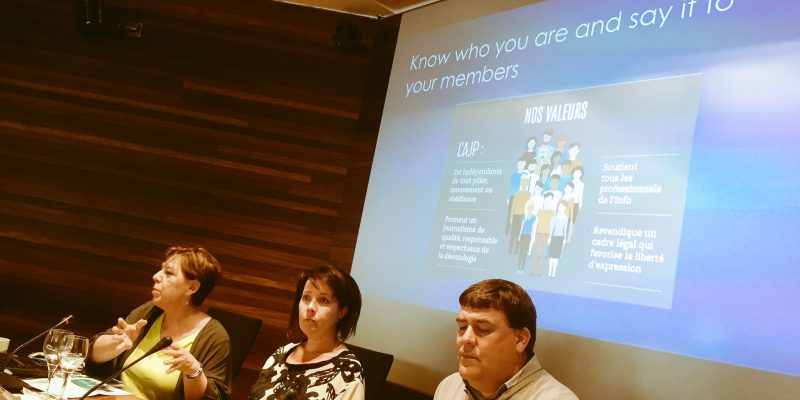 
How to renew and modernise journalists’ unions in order to face tomorrow and manage change in the media? More than 40 leaders of journalists’ organisations across Europe gathered in Lisbon, Portugal, on 4-5 June 2018, to discuss the above-mentioned issues in a workshop organised by the European Federation of Journalists (EFJ), together with its affiliate in Portugal, Sindicatos dos jornalistas (SJ).

The participants strongly agreed on the importance to address the needs of the new generation of journalists, particularly affected by job insecurity. Studies shows that their salaries are lower and their labour rights less protective. The work of the Portuguese union towards the youngsters was showcased in a panel with three journalists who shared their experience about why joining a union.

"When I started my professional career, I didn't feel represented. My problems were job insecurity, economic pressure. I felt that my problems were not being addressed" said young Portuguese journalist who joined @SindicatoJorn after 5 years of work #unions1st

2. Reach out to the female journalists

The young journalists, but also the female journalists have specific needs that have to be addressed. The profession is more and more feminine and yet the gender pay gap is widely present in all media. In the UK, Michelle Stanistreet, General Secretary at the National Union of Journalists (NUJ), highlighted the recent pay scandal at the BBC which has led to outrage among journalists. The NUJ launched an Equal Pay campaign to mobilise and recruit new members fighting for equal pay.  To date, the NUJ has launched 180 collective complaint about gender pay gap at the BBC.

3. Find out the needs of your members

“In order to better address your members, it is necessary to go through a surveying process, as to solve a problem, you need to know what the problems are”, said Erkan Ersoy, organizing director at UNI-Global to the participants. Hilde Tretterud from the Norwegian union, shared the results of the survey carried out in her country: “We found out that young journalists were most interested in having higher ethical standards and that freelancers needed some trainings about how to be a successful journalist as well as networking tools. We are also working on a new website which would allow users to receive targeted information in order to better address them.”

Hilde Tretterud from the Norwegian union explained how they changed the rules for membership: any worker doing editorial work can be a member (except for PR and editorial managers) #unions1st

4. Redefine the mission of your union

Redefine the mission of your union, changing website and revising communication strategy were some of the concrete examples presented as best practices during the workshop. The Swedish union showcased the “Like A Swede” campaign which aimed to target the under 35 and educated worker and promote the Swedish model.

Finally, make sure the identified needs match with the proposed services in order to stay relevant to the members. Shall we reduce or extend the number of services? The participants exchanged about the type of services they proposed in their country such as training, summer schools, speed dating, legal advises, etc.

The project “Managing change in the media has the support of the European Commission and is in partnership with the European Broadcasting Union (EBU)  and News Media Europe (NME), as well as its members in Germany, Greece, Romania, Portugal, Sweden and Turkey.