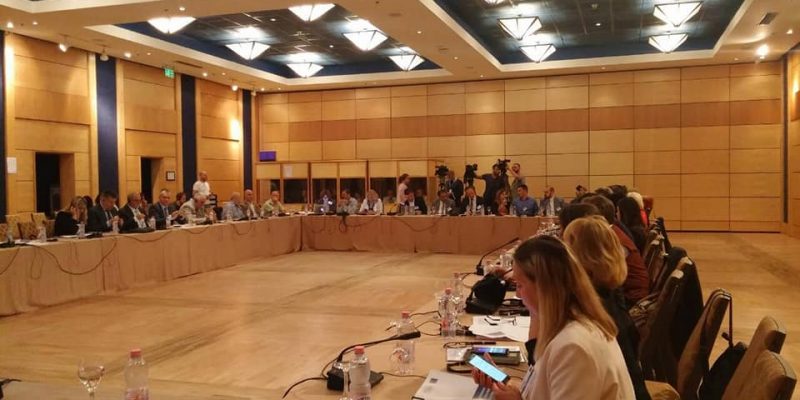 The conference gathered around 60 participants including representatives of international organisations, PSM directors and senior officials, political decisionmakers and representatives of NGOs and broadcasting regulatory bodies from Albania, Bosnia and Herzegovina, Kosovo*, FYR Macedonia, Montenegro and Serbia.

Reminding of the negative assessments regarding PSM in the Western Balkans and Turkey in the European Commission’s latest ELARG package, Programme Manager at European Commission, Karl Giacinti, stressed that the EU sees reforms in PSM as an important part of the overall democratisation process toward EU accession and beyond. Those include ensuring autonomy of financing for the public broadcasting, making PSMs professional, transparent and accountable, and able to function as modern, effective media outlets and not as a bureaucratic and state Public Institutions.

“The reforms have been priorities for years and the EC is impatient to see improvements. We want to see reforms moving ahead visibly. For all these reasons, the EC decided to launch this project and will further invest in this sector to support the production of independent qualitative contents. Additional regional funds managed by Brussels and national funds from the EU Delegations will be available for this and similar initiatives”, announced Giacinti.

The project has been awarded and will be implemented by the International Federation of Journalists (IFJ) together with the European Broadcasting Union (EBU), the European Federation of Journalists (EFJ), the Austrian Public Broadcaster (ORF), the Balkan Investigative Reporting Network (BIRN) and the Eurovision News Exchange for South-East Europe (ERNO).

One of the key speakers at the conference was General Director of EBU, Mr. Noel Curran, whose key message was that of cooperation. “It is only by working together that we can affect real change. Together with our partners and the many PSM organisations gathered in this room we can make a positive impact on media and, by association, democracy throughout the region”, he said.

The capacities of EBU, as Mr. Curran added, would offer a solid base: “Through this project, you will be able to draw on the strength and expertise of the entire Union – 73 Members in 56 countries – to ensure PSM can thrive and grow in the Western Balkans in key areas such as governance, management reforms, investigative journalism, professional standards, archiving, and funding”, said Mr Curran.

“We are stronger together. As a community it is our role to help wider society understand the value of strong PSM; to nurture it; protect it and help it grow and thrive. With all your help I believe we are well on that path. The Assistance to PSM project in the Western Balkans is a tangible example of what we can do together”, he concluded.

As it was presented at the conference the project will deal with three core objectives: 1) to promote European standards and best practices across the Western Balkans as a common frame of reference for independent and professional media , both with regard to models for funding, election and functioning of governing bodies of Public Service Media; 2) To generate synergies between Public Service Media and regional exchanges on policies and practices for a new phase in the media reform process, including integrated newsrooms, editorial guidelines, and long-term strategies. 3) to expand and support cooperation on investigative journalism, mechanisms for coproduction on selected topics and regional exchange of digitized archive materials.

On the second day of the conference, project stakeholders signed the Memorandum of Understandings on co-operation on the project that will run for the next two years.