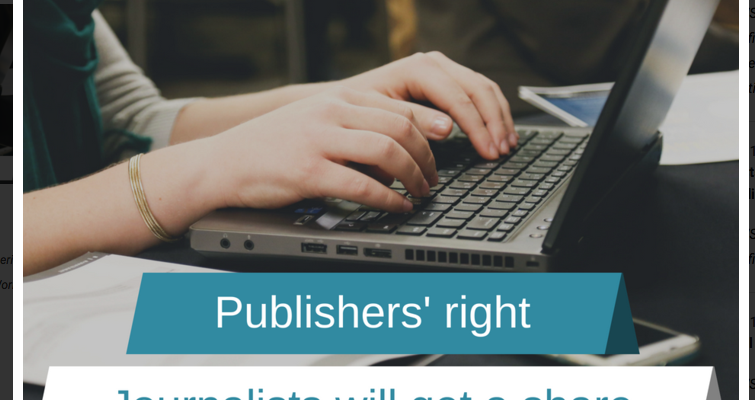 
The European and the International Federation of journalists, the world and European largest organisations of journalists, have agreed with European news publishers on a new wording to ensure a clear and non negotiable share for journalists of the benefits deriving from the future publishers’ neighboring right, a right that has been introduced in the

Proposal for a Directive on copyright in the digital single market which will be voted in the plenary in the European parliament tomorrow, 5th July. The federations urge Members of the European Parliament to give mandate to the legal affairs committee to negotiate on behalf of the Parliament int eh trilogue process.

Journalists and press publishers have agreed on a new wording for Recital 35 of the directive to ensure a clear share of the benefits deriving from the publishers’ right to journalists which should be additional to any remuneration due for the exploitation of journalists’ authors’ rights.

The organisations call on EU institutions to support the wording in their upcoming trilogue process, once the European parliament has voted on its report tomorrow.

Following the agreement between journalists and publishers, Recital 35 must read as follows:

1.         Member States shall provide publishers of press publications with the rights provided for in Article 2 and Article 3(2) of Directive 2001/29/EC so that they may obtain fair and proportionate remuneration for the digital use of their press publications by information society service providers.

1a. The rights referred to in paragraph 1 shall not prevent legitimate private and non-commercial use of press publications by individual users.

2. The rights referred to in paragraph 1 shall leave intact and shall in no way affect any rights provided for in Union law to authors and other rightholders in respect of the works and other subject-matter incorporated in a press publication. Such rights may not be invoked against those authors and other rightholders and, in particular, may not deprive them of their right to exploit their works and other subject-matter independently from the press publication in which they are incorporated.

2a. The rights referred to in paragraph 1 shall not extend to acts of hyperlinking.

4a.       Member States shall ensure that authors, receive an appropriate share of the additional revenues press publishers receive for the use of a press publication by information society service providers.