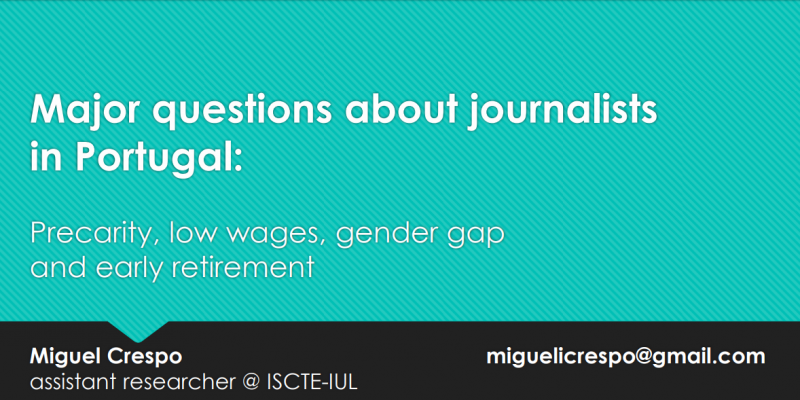 
A survey in Portugal, performed by University Institute of Lisbon (ISCTE-IUL), aimed at analyzing the working conditions of Portuguese journalists, exploring the diversity of journalists, and identifying the main constraints and challenges. Almost 1 500 journalists were surveyed between 1st of May and 13th of June, 2016, with 78 questions on the current situation and their future, for the data to be comparable to international data.

There are 6 161 journalists holding a professional licence or its equivalent in Portugal, according to The Comissão da Carteira Profissional de Jornalista (CCPJ), 16th March 2018, with 51.8% male and 48.2% female journalists.

The survey shows, that 33.4% of surveyed journalists were working not under formal contact, including freelancers and employees. Furthermore, even though 65% of employment contracts were up to 40 hours per week, 60.7% of journalists admitted working more than 40 hours per week,  while only 3.9% are being paid for overtime.

According to the main findings, in general, female journalists are more educated, working longer hours, but are taking less than half of the higher positions, and are less satisfied.

In general, 90% of respondents think that working as a journalist will be increasingly precarious and uncertain.

See all findings of the survey here