Violence against journalists during veteran protest in Sarajevo 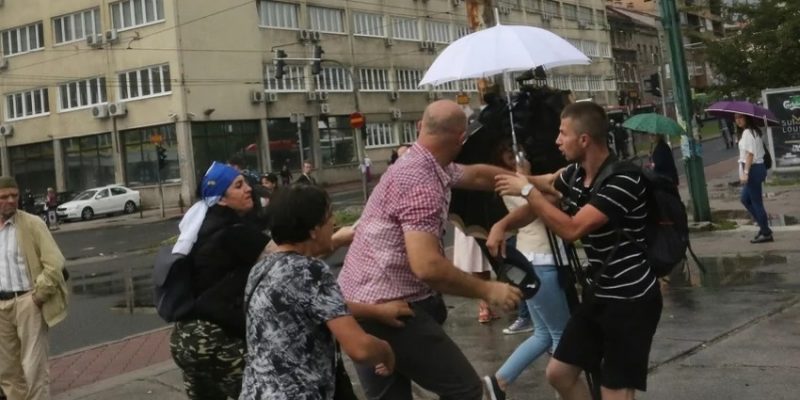 Several journalists were attacked during a violent protest of Army of the Bosnia and Herzegovina Republic veterans on 26th of July, in Sarajevo. A photojournalist of Klix.ba online news portal has been attacked by a group of violent protesters after refusing to stop taking photographs. Reporters from Al Jazeera Balkans TV intervened trying to protect him, but they were also violently attacked by other protesters. The photojournalist was taken to the hospital afterwards.

After the incident, one of the protesters, who was filmed attacking the journalists with a metal stick, claimed that “it was not over”, listing other journalists who she would like to counter. The attacker was arrested and interrogated, currently facing prosecution under the criminal law.

On 27th of July, editorial office of Klix.ba reported to have received an anonymous phone call of a man, threatening to find their reporters “on the streets and chop their heads off”. The man has yet to be identified by the local authorities.

This is the first time an attack against journalists is considered as major offence and the attackers arrested and prosecuted in Bosnia and Herzegovina, as the attackers were treated as minor offenders in similar cases earlier.

European and International Federations of Journalists (EFJ-IFJ) join their affiliate in Bosnia and Herzegovina, BHN, and the OSCE Representative on Freedom of the Media, in strongly condemning violence and threats against journalists, thus asking the authorities to swiftly address the cases.

EFJ-IFJ submitted an alert regarding the case to the Council of Europe platform for the Protection of Journalism.

I condemn physical attack against two reporters of@klixba & @AJBalkans yesterday in #Sarajevo at the protest of war veterans. Those acts of violence against the media are totally unacceptable. I welcome swift police action undertaken to identify the perpetrators. #JournoSafe