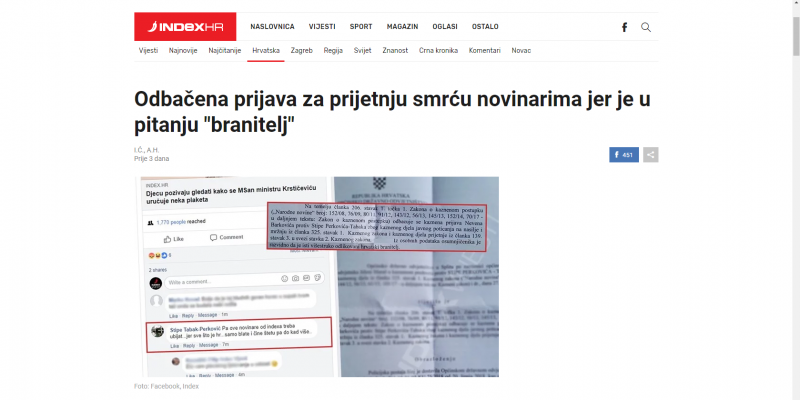 
The European Federation of Journalists (EFJ) joins its affiliate the Croatian Journalists’ Association (HND) in condemning the decision of District State Attorney of Split to reject criminal charges for death threats on Facebook against journalists of Index. The rejection of charges raises concerns on protection of journalists against intimidation and harassment in Croatia, which by all means should be secured for journalists to be able to continue their work.

The court decision was announced after a complaint made by Index journalists against a former veteran, who left a comment on the Facebook page of the news site, stating “these Index journalists should be killed”.

District State Attorney dismissed the charges arguing, that the person left comment after “celebrating his birthday” and was “taken by emotions”, emphasizing, that he was a well acknowledged veteran.

The death threat appeared under an article concerning school children being taken from classes to participate in a ceremony of presenting a plaque to Croatian Minister of Defense, organized by Croatian Homeland War Veterans Association. An anonymous parent voiced their concerns to Index that children are being taken out of school to participate in a political manifestation.

The case was filed by Index journalists under the Article 325 of the Croatian Criminal Code, defining public encouragement of violence and hatred. Attorney Jelena Maraš said that the case and the journalists do not represent the vulnerable group described in the Article, without further explanations.

We find to be inadmissible that deputy District State Attorney, who has to implement laws and protect rule of law, makes possible for just one social group to be above laws that apply to all other citizens. By doing so she violated constitutional principle of equality of citizens. The Croatian Journalists’ Association finds this arbitrary interpretation of the law to be inadmissible and MS Maraš’s point of view that „death threat in the comment that Index journalists should be killed was not serious“ we find to be shameful, said HND in a press statement.