Migrants and ethnic minorities are underrepresented in media 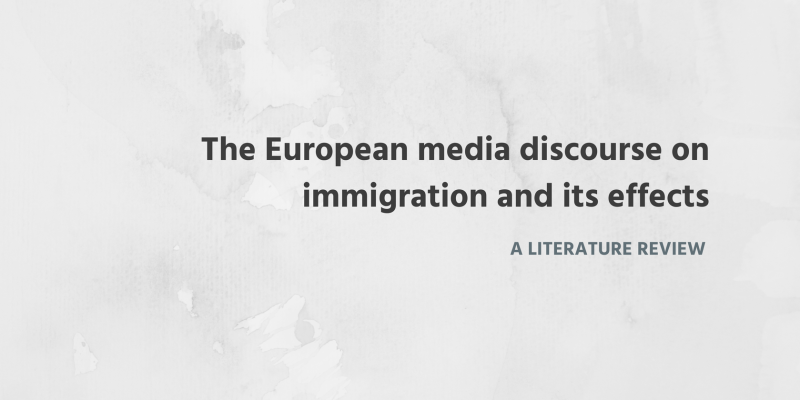 
A collaboration of a team of media scholars, Jakob-Moritz Eberla, Christine E. Meltzerb, Tobias Heidenreicha, Beatrice Herreroc, Nora Theorind, Fabienne Linda, Rosa Berganzac, Hajo G. Boomgaardena, Christian Schemerb, and Jesper Strömbäckd, resulted in a publication “European media discourse on migration and its effects: a literature review“, which sets to explore the landscape of media research covering the media discourse on immigration and its effects across Europe.

The literature review addresses a general problem of under-representation and depicting migrants as delinquents or criminals. Although, media framing differs for specific migrant groups and used discourses, immigration coverage is often negative and conflict-centered, the publication shows. Repetitive exposure to negative messages on migrants leads to negative attitudes towards migration, enforcing stereotypical approach towards the groups, and even influence voting decisions.

Female migrants are even less visible

The research confirms, that migrants and ethnic minorities are underrepresented in media, compared to the respective number of people living in the country. This is particularly visible talking about intra-European migrants. Instead, as seen in the Netherlands and Germany, the most significant social group of immigrants in the news coverage are asylum seekers, and the tendency is reaching while before the refugee crisis 2014-2015. Similarly, in Sweden, news coverage overwhelmingly focused on refugees in the period of 2010-2015, whereas labour migration was covered scarcely.

A study of British television programmes indicates an increase in representations of ethnic minorities, this may be particularly tied to public broadcasting stations having to abide by normative standards of diversity. A study of British newspapers shows that the visibility of migrant and minority actors also increases with their obtrusiveness to the reporting country. In the British press, migration from Eastern Europe was increasingly discussed in 2014, when Romanian and Bulgarian migrants obtained access to labour markets across the EU.

Finally, female migrants are doubly disadvantaged as a minority in media coverage, as they are even less visible than male immigrants

Study shows, that the terms ‘migrants’ and ‘immigrants’ are closely associated with the media frame of economic threat – for instance, threat of increased competition on the labour market,- while ‘refugees’ and ‘asylum seekers’ are associated with an economic burden – such as a burden on the country’s welfare system. In general, Eastern Europeans are more often depicted as a threat to the economy and welfare system, while Non-Europeans are seen as a threat to the host countries’ culture. Conversely, some studies show the refugees being often depicted in the context of economic crisis, antipathy of Islam, or terrorism, which relates to the threat-framing.

The differences in framing may be caused by varying editorial approaches by different media, with tabloid papers deliberately tending to cover immigration more negatively than the highbrow press, or may also arise because media outlets focus on different parts of the immigration debate. For example, the cultural frame is more prevalent in the media discourse about integration of immigrants, while the labour, welfare, and economic frames are more present when it comes to the question of immigration itself.

Negativity and certain tone towards immigration-related issues and migrant groups may also vary between media genres. Comparing different television formats it was found that ethnic minorities are portrayed more positively in talk shows than in any other television format. Furthermore, there are differences between types of media as well. On average, television news tend to portray immigration or immigrants much more negatively than print news. While liberal newspapers will, at times, exhibit more positive portrayals of immigrants than conservative ones, they may also focus on different dimensions of negativity – conservative newspapers focusing more on crime, and liberal newspapers on more moderate issue of group-related problems.

When considering the researches referring to European discourse on migration, the media researches focus on only a few key countries in Europe. In fact, based on the systematic review using the EBSCOhost database, 78 studies were identified using quantitative or qualitative methods of content analysis, dealing with media coverage about immigration. The studies cover a wide range of European countries, but only 19 studies investigate an Eastern European country (including Russia). Furthermore, only 20 studies investigate more than one, and only 9 more than two countries. More importantly, even when the studies have a comparative set-up, they are often limited to mere descriptions of results, without the aim of explaining differences between countries.

The Western European dominance becomes more palpable when looking at media effects studies. Out of 22 identified journal publications, merely one investigates an Eastern European country (namely Romania) and only three are comparative studies. While this systematic search is far from comprehensive, it should still provide a good overview of geographical focus of the recent literature.

The researchers affirm, that Europe is not a homogeneous group of countries. Thus, the visibility and framing of immigration issues and actors, as well as their impacts, may differ in more or less systematic ways.

The full study can be found here.