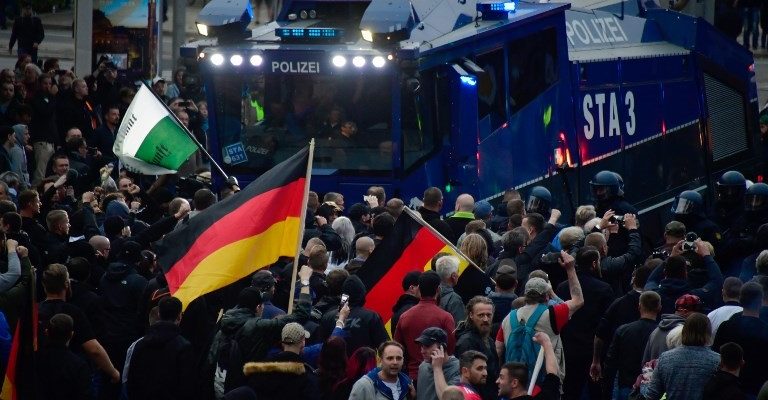 
“What happened in Chemnitz this weekend including violent acts against media workers concerns us all,” said EFJ President Mogens Blicher Bjerregard. “It is ever more urgent in Germany and elsewhere in Europe that democratic institutions and the police protect journalists against right-wing extremists. We pledge for intense training for the police and dialogue between journalists and police to better understand each-others’ role.”

Almost 10,000 people are estimated to have taken part in protests in Chemnitz on Saturday 1 September – led by members of the right-wing Alternative for Germany (AfD) party, the anti-Islam Pegida movement and a large group of Hooligans– as well as in a counter-demonstration.

As with previous protests, the press was targeted with chants of “Lügenpresse” (lying press). In one of the more serious incidents, a camera team from the German public local broadcaster MDR was assaulted when the journalists requested access to a balcony to film the demonstrations.

On 3 September, more than 10,000 people are expected for another demonstration in Chemnitz. The Deutsche Journalisten-Verband and the Deutsche Journalisten Union in ver.di have both urged the police and security authorities to better protect journalists covering demonstrations and public events. “It cannot be that Neonazis attack journalists without being hindered or accused by the police” agreed the EFJ with its German affiliates. Democracy and the rule of law are at stake here.

According to the relevant case-law of the European Court of Human Rights, the “watch-dog” role of the media representatives is of particular importance in such contexts, since their presence is a guarantee that the authorities can be held to account for their conduct vis-à-vis the demonstrators and the public at large when it comes to the policing of large gatherings, including the methods used to control or disperse protesters or to preserve public order.

As outlined in the OSCE safety of journalists guidebook, police and governmental authorities should be mindful of the fact that journalists may be especially vulnerable to malicious physical attacks on account of their work. They should be prepared to take steps to provide protection in cases when there is a substantial or imminent fear of assault or harm.