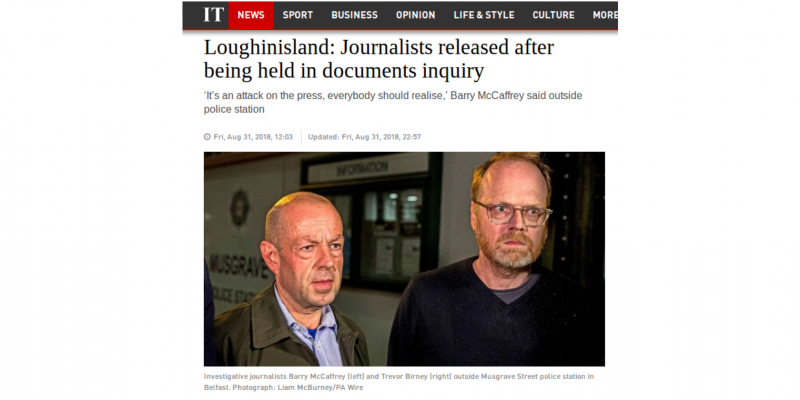 
Investigative journalists Trevor Birney and Barry McCaffrey were arrested on the morning of 31 August after police search was held in their houses and offices. The journalists were accused of theft of confidential documents related to the Loughinisland massacre. The laptops and possessed information were confiscated. Both journalists were released from custody on bail on the same night.

Trevor Britney and Barry McCaffrey were involved in a documentary “No Stone Unturned”, which investigates the massacre of six people on 18 June 1994, when a loyalist gunmen opened fire on the customers in a bar in Loughinisland, Co Down. After shift in the Police Ombudsman office in 2016, a new Ombudsman report found that there had been a collusion between the local police and terrorist group responsible for the shooting, adding, that the police investigation had been undermined by “a desire to protect informers”. In 2017, the investigation of “No Stone Unturned” managed to name the main suspects.

On Friday, lawyers for the documentary maker, Fine Point Films, brought emergency proceedings to Belfast High Court, challenging the legality of the search warrant used by police. The court was told that detectives were prepared to give an undertaking not to examine any of the material seized by police until the court had made a further order.

The European and International Federations of Journalists (EFJ/IFJ) joined their affiliate the National Union of Journalists (NUJ) in United Kingdom and Ireland in expressing a grave concern of the arrests of Trevor Birney and Barry McCaffrey.

The protection of journalistic sources of confidential information is of vital importance and journalists must be free to operate in the public interest without police interference. These journalists are entitled to claim journalistic privilege and to seek the protection of the legal system  if there is any attempt to force them to reveal sources.

It is also worrying, as expressed by NUJ, that police attention was focused on journalists “rather than on the issues raised in the documentary”.