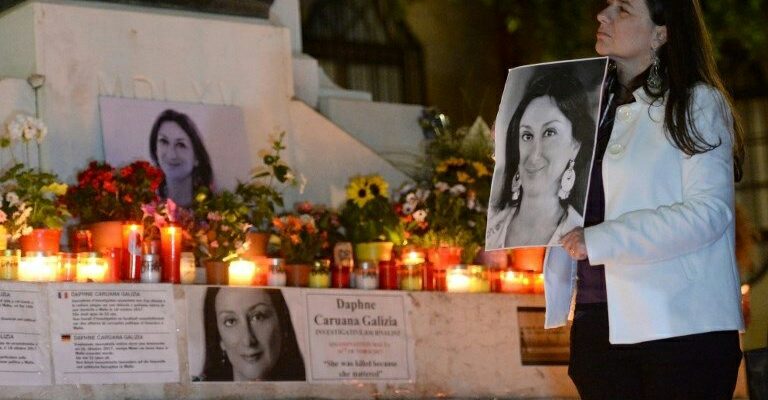 
The European Federation of Journalists (EFJ) has published today a joint statement of findings from an international freedom of expression mission to Malta from 15-17 October 2018. The mission found that the Maltese authorities are not living up to their obligations to guarantee and safeguard freedom of expression and press freedom. The joint mission issued a set of recommendations.

EFJ Steering Committee member and FNSI (Italian journalists’ union) deputy General Secretary, Anna del Freo travelled to Malta along with representatives of the Committee to Protect Journalists (CPJ), the European Centre for Press and Media Freedom (ECPMF), the International Press Institute (IPI), PEN International, and Reporters Without Borders (RSF), to raise concerns about a lack of justice a year after the assassination of investigative journalist Daphne Caruana Galizia.

The final report of the joint mission found that “defamation lawsuits have been used excessively to target independent journalists in Malta. Most of the journalists the delegation spoke to cited past or present cases of civil and/or criminal defamation lawsuits filed against them, often by public officials, including the prime minister’s chief of staff, Keith Schembri, and Minister of Tourism Konrad Mizzi. Such lawsuits were described as deterrents to journalists who might otherwise be more willing to take up critical investigations or sensitive reporting. The delegation notes with concern the fact that Prime Minister Joseph Muscat continues to pursue a civil defamation lawsuit against Caruana Galizia posthumously, as well as a suit against her son, Matthew Caruana Galizia. (…) The delegation considered the pursuit of such lawsuits against a journalist posthumously to be vexatious.”

One of the final recommendation to Maltese authorities asks public officials “to refrain from taking punitive and retaliatory action against journalists.”

The mission’s full joint statement of findings is available via download: