The Copyright directive must safeguard fair and proportionate remuneration for journalists, warn IFJ/EFJ 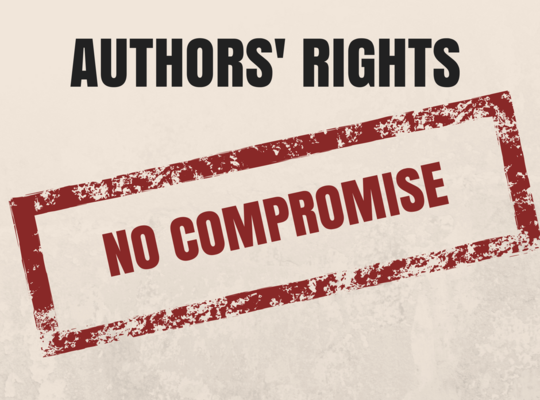 In the frame of the EU tripartite negotiations on the Copyright Proposal, the IFJ and the EFJ call on EU institutions to stand up for journalism by safeguarding journalists’ fair and proportionate remuneration from the new neighboring right and strengthening the Proposal’s transparency provisions.

Following the approval by the European Parliament on 12th September of the Directive on Copyright in the Digital Single Market (DSM) – a major step forward in protecting authors’ rights- EU institutions, namely the Council, the Parliament and the Commission, have now entered into their final phase of negotiations through a trilogue that should last until a final text is approved by the 3 bodies.

In a statement  published today, the IFJ and the EFJ have reiterated their grave concerns over the rampant reproduction and misuse of journalistic works online by third parties without authorisation or remuneration. Such practice has led to”the weakening of the media industry and created serious threats to independent journalism and thus to democracy worldwide”, claim the two federations.

IFJ and EFJ have also expressed concerns regarding the weakening of the authors’ bargaining position and the unfair licensing practices and buy-out contracts journalists too often have been forced to accept, to make a living.

“If implemented fairly, a neighboring right for press publications can help counter threats to independent journalism and the massive reproduction of journalistic works”, said the federations.

The organisations call on the EU institutions to address these issues and “ensure that a fair and proportionate share of the new revenue will trickle down to authors (Article -14) and strong transparency measures will be put in place to ensure this is enforced (Articles 14 to 16).”

These transparency measures introduce a reporting obligation on the exploitation of journalistic works and the revenues generated, a significant improvement in a sector where reporting mechanisms are widely disregarded.

Thanks to such obligations, journalists will be informed of the use that is being made of their works and the revenues generated from this use, whether online, in print, or in broadcasting. Journalists should also be able to claim extra payment when the exploitation of their work overtakes the original contract’s terms. They must be given the opportunity to address disputes through mediation mechanisms or courts and to be represented by their unions in these instances.

Journalists’ federations have in recent months joined forces with other authors’ groups to support these principles, which have ultimately been backed by over 130 authors’ organisations across Europe. Following the adoption of the Proposal on 12th September, a coalition of authors’ groups including the IFJ/EFJ have formulated a number of recommendations regarding the wording of some of these provisions.

In the past months, journalists’ federations have also led a joint campaign with European publishers’ federations to support a neighboring right for press publications, whose revenue is fairly and proportionately distributed between publishers and journalists. A joint approach and wording for a new “Recital 35” (1) were also agreed to ensure a fair share for journalists, irrespective of the contractual terms concluded between publishers and authors and of national industry licensing standards.

IFJ and EFJ regret that an alternative version of Recital 35 was adopted on 12th September that deprives journalists from sharing the benefits deriving out of the neighboring right.

The Federations therefore urge EU institutions to adopt an amended version of Recital 35 and caution against the adoption of any Proposal that would marginalize authors or deprive them of a fair and proportionate share of the new revenue.