Council of Europe: #EndImpunity for crimes against journalists 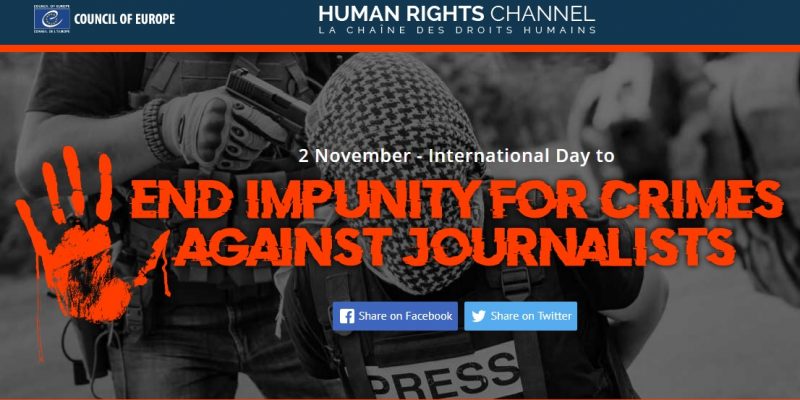 
Today, marking the ‘International Day to End Impunity for Crimes against Journalists’, the Safety of Journalists Platform launches a special page, which presents 16 cases of unsolved murders of journalists in the Council of Europe member states, as submitted by the partner organisations, including the European Federation of Journalists and the International Federation of Journalists. These cases are listed on the platform as impunity for murders, highlighting deficiencies in investigations and failure to bring to justice all the perpetrators, the organisers or the masterminds of these crimes.

On the same occasion, the partner organisations, including EFJ and IFJ, have decided to move a number of alerts, initially submitted to the Platform as physical attacks, to the category of ‘impunity’. This decision is based on their assessment that the responding authorities failed to comply with their obligations deriving from Article 10 of the European Convention on Human Rights following killings, attacks and ill-treatment of journalists. One alert concerns the murder of a journalist in Turkey (murder of the Syrian Journalist Naji Jerf), while the other five concern severe physical attacks against journalists in: Serbia (Ivan Ninić case), Russia (publisher Denis Shaikin and reporter Dmitri Remisov), Greece (reporter Demitrios Perros) and Macedonia (journalist Marjan Stamenkovski).

Following this decision, there will be 26 impunity alerts on the Platform, including 17 cases of impunity for murders of journalists.

The special page on the impunity for murder can be accessed here.

Impunity for crimes against journalists gives a licence for more violence. @coe states have the duty to make Europe a safe place for journalists #EndImpunity #journosafe Protect #PressFreedom pic.twitter.com/3fpZNDph01