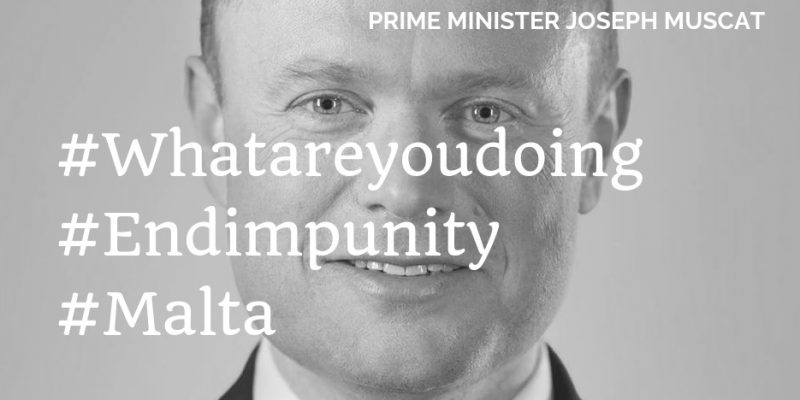 
On 16th October 2017, Maltese investigative journalist Daphne Caruana Galizia was murdered in a car bomb attack in the town of Bidnija, near her family home. One year on, impunity remains because of the lack of an independent public inquiry and the unwillingness of the Maltese government to take concrete action. In addition press freedom is worryingly threatened and is decreasing since Daphne was killed.

Daphne Caruana Galizia was a prominent investigative journalist who published a blog since 2008, labelled Running Commentary, one of the most widely read websites in Malta. She revealed a lot of stories on corrupted politicians, namely key figures of the Labour Party, the sitting party in power in Malta, and on his prime Minister, Joseph Muscat.

Over the years because she was an investigative journalist she faced verbal and legal retaliation, continuous harassment and occasional physical threats. Insecurity and impunity for these acts were a reality that Daphne and her family had to live with for years. Even before she starts her blog in 2008, the family’s collie dog had its throat slit and was left on the doorstep. Besides one night, Paul Caruana, the youngest of Daphne’s three sons, found petrol and car tyres that had been placed there and set alight. Daphne was also the target of an online smear campaign, even led by key political figures that didn’t like she was investigating on them.

Daphne also faced legal threats to stop her reporting. When she was killed, 43 libel cases were pending against her, many from high-level politicians. Moreover, the independent columnist and blogger had her bank accounts frozen since February 2017. In a statement published on her blog, Daphne denounced an attempt not only to stop her but also to gag the press in Malta. Following this event, the IFJ and the EFJ created an alert on the COE Platform to promote the protection of journalism and safety of journalists, to denounce the frozen of her bank accounts.

Today, 34 defamation cases continue against her posthumously, including cases brought by Malta’s Prime Minister Joseph Muscat and Malta’s Minister for Tourism Konrad Mizzi. All these attacks, defamation, dead threats had stayed unpunished before and after her death. Daphne was unsafe. She reported it but nothing was done to protect her and this conducted to her terrible murder.

In December 2017, the investigation into Daphne’s murder resulted in the arrests of only a few suspects. Three of them, were charged with her murder. However so far, there is a failure to identify the masterminds behind Caruana’s assassination. The journalist’s family has filed a legal claim against Malta’s police force, arguing that the investigation had not been conducted independently nor impartially, because of connections between a senior police investigator and a government minister. Her relatives also urged the police to examine financial transactions that could help uncover vital evidence. Her son, journalist Matthew Caruana Galizia who fight for the truth on her death, is also targeted online, victim of online harassment and his pursued in court.

Daphne terrible case highlights that journalists’ basic protection in Malta has deteriorated and that impunity is prospering.

The European Federation of Journalists (EFJ) published the results of an international freedom of expression mission to Malta, led on 15-17 October 2018. The mission found that the Maltese authorities are not living up to their obligations to guaranty and safeguard freedom of expression and press freedom.

The lack of media independence and media concentration as well as the lack of independent public service media governance and funding, are several indicators of high risk for media freedom and pluralism in Malta. The mission report shows that Malta is the only EU country where political parties hold such extensive media ownership. Journalists and Daphne’s relatives denounce that the government uses its control of the State broadcaster TVM, to under-report important news items, hiding them from viewers and readers when those items are harmful to the government and the Labour Party’s reputation.

Malta is also one of a few countries in Europe that has no policy on media literacy. Moreover, the lack of journalists trade unions to defend working conditions and protect journalists is alarming. The EFJ underlines that its existence would help in making progress in Daphne’s case and would give a stronger and safer voice to others journalists. All this growing fear environment leads to an insidious self-censorship from journalists.

The international organisations that led the mission in Malta also noted the Prime Minister’s lack of availability for interviews and scrutiny from the press, claiming that press conferences and scripted answers were no replacement to proper journalism work.

International organisations are appalled by the government’s blockade of the protest memorial for Daphne, Claiming that this is a completely disproportionate response to a legitimate peaceful protest calling for justice for the murder of a journalist.

Today it more urgent than ever that a public inquiry is immediately and unequivocally instituted. Malta must urgently return to a path of true freedom of expression, the most essential pillar of any democracy.