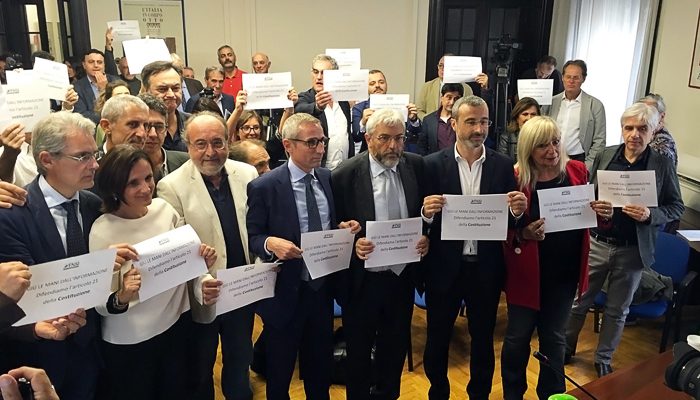 
On November 10 2018, in occasion of the acquittal of Virginia Raggi, the mayor of Rome who was charged with forgery in relation to the appointment of Renato Marra as head of the Tourism Department, the Italian Deputy Prime Minister Luigi Di Maio and the Five Stars Movement MP Alessandro Di Battista attacked again Italian journalists. The European Federation of Journalists (EFJ) joins its Italian affiliate, Federazione Nazionale della Stampa Italiana (FNSI), in organising a protest action  on November 13 to speak out against these systematic attacks against the press in Italy with the hashtag #GiùLeManiDallInformazione (Hands off the information).

The two M5S representatives published long posts on their official Facebook pages with serious insults against journalists. While Di Maio called them “negligible jackals” stating that journalists are “the true plague of this country” and announcing his intention of drafting a new law to restrict the activities of publishers, Di Battista has even written harsher words calling Italian journalists “whores who do not prostitute out of necessity”.

FNSI General Secretary Raffaele Lorusso said that these declarations are not only dangerous but also hypocritical. “Meeting together in the Italian squares means rejecting all crude and unacceptable attacks against information and journalists. Now it is no longer a question of isolated incidents. We are facing organised actions to discredit  professional journalists and aimed at disorienting public opinion.”

Anna del Freo, Italian member of the EFJ steering committee, said: “Theses declarations are of unprecedented seriousness in the history of the post-war period. Di Maio, after the insults, has even threatened to push the big state companies to not advertise in newspapers that criticize the government. These are attacks that come from a deputy prime minister, or rather from an institution that should care above all to defend democracy and treat all citizens alike, instead it threatens freedom of expression, one of the fundamental rights guaranteed by the Italian constitution. Di Maio and his government cannot stand criticism. The Italian journalists’ union, together with the National Order of Journalists, will continue to fight to guarantee citizens the right to be informed.”

“Di Maio and Di Battista’s declarations remind me of Slovakian Prime Minister Robert Fico who called journalists dirty, anti-Slovak prostitutes,” said EFJ President Mogens Blicher Bjerregård. “Indeed, more and more European leading political figures demonise the media. Their willingness to smear journalists, rather than debate the facts, is one of the major threats to media freedom in Europe. This is why we immediately reported this new media freedom violation to the Council of Europe Platform for the Protection of Journalism.”

The European Federation of Journalists will organise a protest action on 13th November at 12 am in front of the Residence Palace in Brussels with the hashtag proposed by the FNSI #GiùLeManiDallInformazione (#HandsOffMedia). The “flash mob” will be held simultaneously in the different squares of the Italian regional capitals on 13th November.