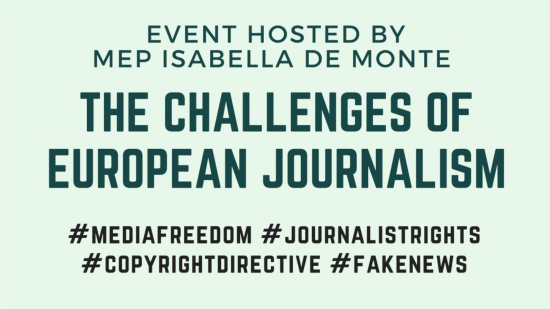 
On 27 November, Italian MEP Isabella De Monte (S&D) organised the event “The challenges of European Journalism”, taking as an example the recent problems of Italian journalism, such as politicians’ attempts to undermine public media credibility and the difficult economic situation of Italian journalists and media, to discuss about the more widespread attacks to free press throughout Europe. An issue that has to be addressed right now before the European elections with disinformation on the rise said De Monte.

“There is a problem of press freedom in Italy. Today we are witnessing an attempt to marginalise information from those who not only insulted journalists heavily, but also put on the agenda measures damaging the press and in particular the smaller media companies; beyond that a shameful attempt to exploit precarious journalists, a sort of “uberization” in the sector,” stated Raffaele Lorusso. He stressed the importance of proper remuneration of journalists as a sine qua non for quality journalism in a democratic state.

“Three thousand jobs have been lost in the last five years. Today, of the 15000 journalists employed in Italy, around 7000 benefit from social security funds. The tendency to cut labour costs continues at an unprecedented speech. The 188 million euro allocated by prior governments to the one in office were entirely used by publishing companies to carry out their restructuring processes through early retirement and solidarity contracts”, said Lorusso.

Renate Schroeder showed that the Italian case is not isolated in Europe. According to her, it is important to reflect on what can be done at European level, and what has already been advocated by the European Parliament by adopting initiatives on media freedom, on whistleblowers and on strengthening authors’ rights by giving them fair remuneration in digital media.

“We need to elaborate more on transparency of media ownership and media literacy as a structural response involving civil society in monitoring social media and understanding the process in which journalists work”, she said.  ” Oligarchs know how to manipulate media and use them to achieve their own purposes, spreading mistrust on the ones that criticize them. ” Public trust will only return when people have confidence that powerful institutions are accountable and listening to their concerns. Journalism at its best can do this job. The latest examples of cross border investigative journalism, such as the implant files, show how important journalism is when it is doing its work.”

The discussion focused on professional journalism, importance of minority media, of training in innovation and ethics, and the role played by new technologies, including the dominance of Internet providers and their exploitation of advertisement revenue.

MEP Isabella De Monte in her concluding remarks said that there is no time to lose and more has to be done to secure the sustainability of the media and of journalism. “The European Parliament is the place of democracy and in our view democracy is based on good information; we cannot thus allow any threats to free press. This is happening in various ways, from skipping press conferences to denigrating or discrediting journalists by damaging their credibility. We must absolutely counter the current attacks to the press because it is in the interest of citizens who have the right to be informed,” she underlined.