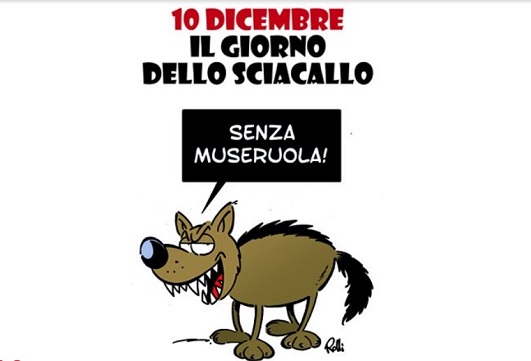 
On the December 10, the Human Rights Day, Italian journalists have once again organised a protest against the attacks of some members of the government. They gathered to defend the dignity of Journalists’ work and the values contained in Article 21 of the Italian Constitution (guaranteeing free speech). The European Federation of Journalists (EFJ) keeps on supporting its Italian affiliate, Federazione Nazionale della Stampa Italiana (Fnsi), in the fight against the continuous attempts to limit journalists’ work in the country.

On the same day, the Italian Deputy Prime Minister Luigi Di Maio (5 Star Movement) convened FNSI and the National Order of Journalists (Cnog) to discuss about the precarious working conditions of Journalists. However, for FNSI and Cnog this was only propaganda put in place by the 5 Star Movement. Italian journalists’ representatives have thus refused to speak with Mr. Di Maio and organised in response a public assembly in front of the Ministry of Economic Development in Rome.

“Minister of Maio summoned us today to Mise and we are today in front of the ministry to reiterate our ‘no’ to precariousness and our ‘yes’ to media pluralism. We were told that we would talk about fair compensation and precarious work, but how can we talk about combating insecurity with those who work on measures that will create more unemployment and more job insecurity? Measures that will cost the workplace a thousand colleagues,” stated the general secretary of FNSI Raffaele Lorusso.

Although not yet approved, the cutting of publishing fund proposed by Luigi Di Maio is already producing its side effects; such as the closure of the newspaper editorial Il Messaggero di sant’Antonio and Radio Radicale, with the consequent loss of job for many journalists.

“If you call up journalists previously defined ‘jackals’ or worst, first you have to take a step back, apologize, especially to those colleagues who are ready to put themselves at risk to not give up on informing. Without respect and mutual legitimacy, one can’t sit at the table. We could not allow it. We need first of all respect for journalists,” concluded Lorusso.