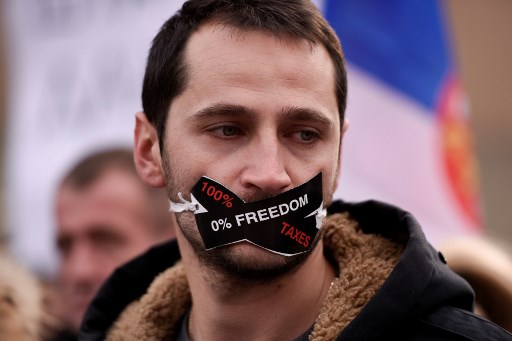 On December 5, the international press freedom organisation ARTICLE 19 issued the ‘Expression agenda report 2017-2018‘; an analysis on the global status of freedom of expression. The findings are anything but positive. There is a decline in the situation of free press in 24 countries around the world since 2014, and this affects Europe as well. Even though the worst performing countries of the index are non-European countries, the hostility towards the media has become normalised particularly in Eastern Europe, where Poland, Croatia, Romania and Turkey saw a decline in the different areas of the index between 2014 and 2017.

The report measures freedom of expression across five areas: civic space, digital freedom, media freedom, protection and transparency. Media freedom was the area presenting the worst performance in 2017 and this appears to be mostly due to self-censorship. The data present a chilling picture with 78 murdered journalists and 326 imprisoned journalists, among which 97% were local reporters. Globally, freedom of expression and information is at its lowest point for ten years and the situation has drastically deteriorated  especially in the last three years.

“The climate for independent and critical media is worsening across Europe: in many places, rhetoric has become openly hostile towards journalists, and national security concerns are overriding the need for a free press and an informed population,” the report says.

In fact, the results show that in the area of media freedom, two EU countries are among the top 5 decliners between 2014-2017: Poland and Croatia. In these two countries governments have been determined to seize control of media and to restrict the capacity of journalists to speak with a critical voice. Additionally, Turkey appears among the top 5 decliners in almost all the analysed areas.

This global decline in freedom of expression goes thus hand in hand with rise in ‘strongman’ politics, in countries where governments threatened media pluralism through restrictive laws and direct attack to journalists criticising their operate.

“This report is a wake-up call about the precarious state of freedom of expression and how quickly it can be undermined by those who want to close down free speech, dissent and informed opposition.  We call on governments and power-holders to look at the evidence of our report and commit to reversing this corrosive trend. This is a global phenomenon with many violations happening in countries where freedom of expression has traditionally been protected,” commented Article 19 Executive Director Thomas Hughes.

There is anyway a slightly positive outcome for some of the Western European countries, such as Germany, Norway, Denmark and Switzerland, which are the top performers in most of the five areas of the index.