Mapping Media Freedom’s latest report aims to raise awareness among international and national decision-makers who seem to ignore how dire the situation really is across Europe. The MMF project managed by Index on Censorship, in partnership with the European Federation of Journalists (EFJ), monitors the threats, violations and limitations faced by investigative reporters in 43 countries — throughout European Union member states, candidates for entry and neighbouring countries.  Since 2014, 283 attacks were reported against investigative journalists. Mapping Media Freedom’s numbers reflect only what has been reported to the platform. Journalists tend to under-report incidents they consider minor, commonplace or part of the job, or where they fear reprisals.

Investigative journalists are facing two major issues: firstly, the increased number of attacks on reporters investigating corruption and secondly, the impunity from prosecution their attackers enjoy. The MMF underlines not only an increase in media concentration across EU35, notably in Hungary but also an increased number of media under the thumb of political parties.

“Journalism is a public good and should be considered as an act on behalf of the public’s right to access information,” says Mehmet Koksal (EFJ).

The report underpins a significant rise in attacks between 2014 and 2018. Reported attacks on media freedom rose from as low as 38 in 2014 to an all-time high 75 in 2018. No less than 206 investigative journalists in the 35 countries that are in or affiliated with the European Union (EU35) were being targeted between 1 May 2014 and 31 December 2018. An additional 77 reported attacks showed other media workers being targeted for their role in reporting on corruption as well. But most importantly, Europe has seen 3 reporters killed for doing investigative work.

Journalists are murdered in Europe

Three investigative journalists were murdered in Europe in less than 12 months. The assassination of independent Maltese investigative journalist Daphne Caruana Galizia in a car bomb on 16 October 2017 marked a point of no return for the EU. Caruana Galizia’s death was followed by the murder of Slovakian journalist Ján Kuciak and his partner Martina Kušnírová on 26 February 2018, and the rape and murder of Bulgarian journalist Viktoria Marinova on 6 October 2018. Authorities say Marinova’s death is not connected to her being a journalist, a claim some colleagues have disputed.

How investigative journalists get threatened

Leading the offensive against investigative journalism is Italy (40), followed by Hungary (25), Serbia (24), France (19) and Turkey (18). “In these five years in Italy, investigative journalism has become increasingly risky, both for journalists themselves and for the media,” says Alberto Spampinato, the director of Ossigeno per l’informazione, an Italian press freedom monitor.

Anuška Delić, a Slovenian editor with the Organized Crime and Corruption Reporting Project (OCCRP) and founder of Oštro, a centre for investigative journalism in the Adriatic region, explains “It is usually independent media or journalism centres that are investigating corruption”. She also warns that more EU member states – Hungary, Poland, the Czech Republic and, to an extent, Slovakia, Italy and Austria – are failing to live up to democratic standards. Delić considers there has been a failure at the European Union level to realise freedom of the press did not actually exist in those nations: “How many journalists have to die before we realise something is wrong?”

Governments must respect the right of journalists to protect confidential information and sources. This is vital, especially in cases involving whistleblowing in the public interest.

What should be done? 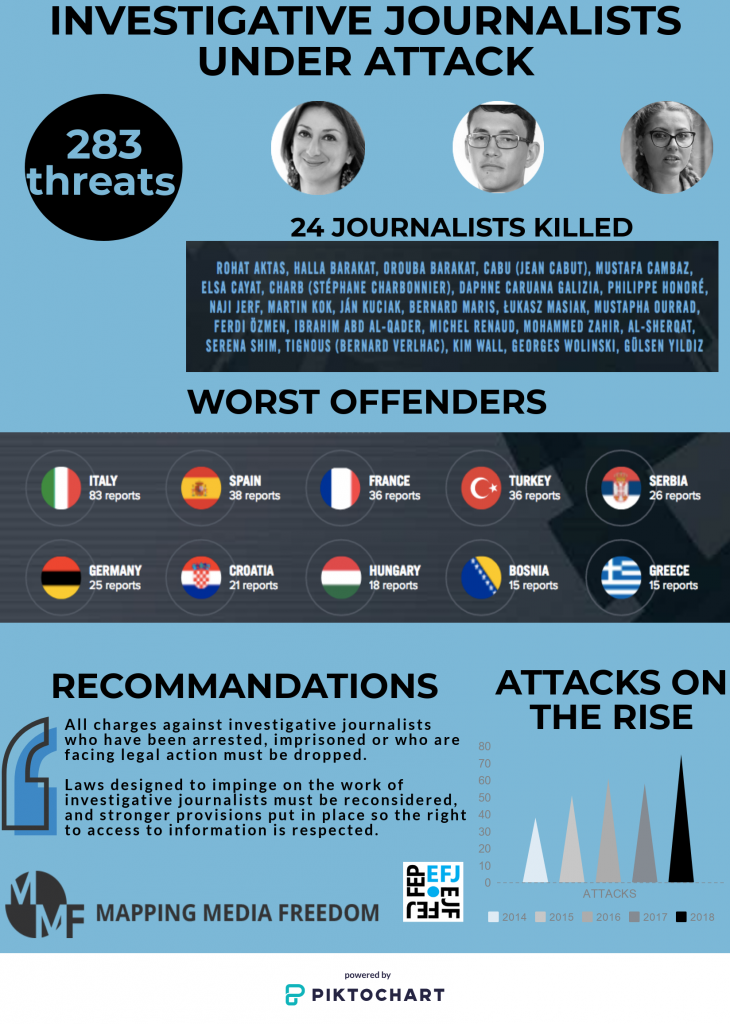