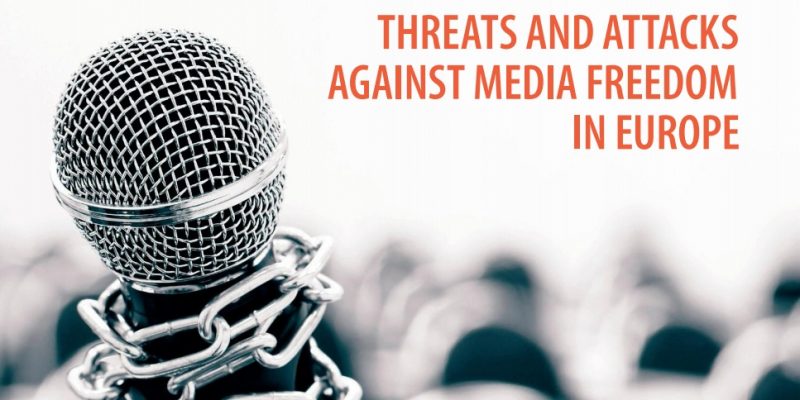 
Press freedom in Europe is more fragile now than at any time since the end of the Cold War. That is the alarming conclusion of a report launched today by the 12 partner organizations of the Council of Europe Platform to promote the protection of Journalism and safety of journalists.

The report, “Democracy at Risk”, analyses media freedom violations raised to the Platform in 2018. It provides a stark picture of the worsening environment for the media across Europe, in which journalists increasingly face obstruction, hostility and violence as they investigate and report on behalf of the public.

The 12 Platform partners – international journalists’ and media organisations as well as freedom of expression advocacy groups, including the International Federation of Journalists (IFJ) and the European Federation of Journalists (EFJ) – reported 140 serious media freedom violations (“alerts”) in 32 Council of Europe member states in 2018. This review of the alerts reveals a picture sharply at odds with the guarantees enshrined in the European Convention on Human Rights. Impunity for crimes against journalists is becoming a “new normal”. Legal protections for critical, investigative reporting have been weakened offline and online. The space for the press to hold government authorities and the powerful to account has shrunk.

This report, which reflects the findings of 12 leading press freedom groups and journalists’ organisations, shows clearly the serious threat to press freedom in Europe, with journalists increasingly the target of physical and verbal attacks in retaliation for their work. The partner organisations believe it comes at a crucial moment, with governments across Europe increasingly ignoring or seeking to weaken the human rights guarantees that protect journalists’ right to disseminate the news. Together with their partners, IFJ and EFJ urge European institutions to take a stronger stand in defence of  press freedom as a fundamental and necessary pillar of democratic societies.

Last year the murders of Ján Kuciak and fiancée Martina Kušnírová in Slovakia and Jamal Khashoggi in the Saudi Arabian consulate in Istanbul, Turkey, were among 35 alerts for attacks on journalists’ physical safety and integrity. Alerts about serious threats to journalists’ lives doubled, and were accompanied by a strong surge in verbal abuse and public stigmatisation of the media and individual journalists in Council of Europe member states.

“Urgent actions backed by a determined show of political will by Council of Europe member states are now required to improve the dire conditions for media freedom and to provide reliable protections for journalists in law and practice”, the report warns.

The purpose of the Platform, based on a 2015 agreement between the Council of Europe and the partner organisations, is to prompt an early dialogue with member states and hasten remedies for violations and shortcomings in the protections for free and independent journalism.

The Platform partners call on states that impose the harshest restrictions on journalists’ activities’ and freedom of expression to:

In addition, the Platform partners call on all states to reply fully and in good faith to all alerts and to take effective measures in law and practice to remedy the threats to the safety of individual journalists and media.

The Council of Europe Platform was launched in April 2015 to provide information which may serve as a basis for dialogue with member states about possible protective or remedial action. While many member states responded to alerts in 2018, five states declined to respond to any alerts, including those reporting very serious media freedom violations.