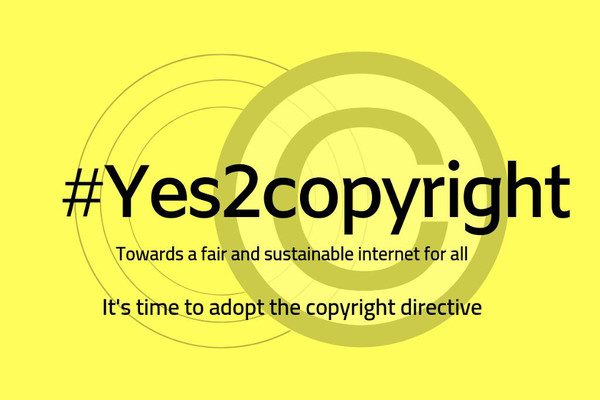 
The European and International Federations of Journalists (EFJ-IFJ) call on the European Parliament to adopt a copyright directive that benefits all journalists.

Since it was first introduced, both journalists’ federations have worked jointly and tirelessly, supporting the proposal and working to improve it. The federations continue to seek improvements and clarifications in the lead up to the crunch vote on its adoption this month.

The proposed directive, the federations say, includes important provisions for the creative and media industries and for authors. It offers the publishing industry and journalists a share of the revenue their work generates online (Article 11), introduces the principle of appropriate and proportionate remuneration for authors (Article -14), key transparency obligations, alternative dispute mechanisms and the possibility for authors to be represented by their unions (Articles 14-16).

However, serious concerns remain over the risk that journalists in some EU Member States may be entirely deprived of their share of the revenue through buy-out contracts whereby authors are forced to abandon all rights and entitlements (Recital 35), lump sums and other abusive measures which the current text of the Directive fails to tackle.

The IFJ/EFJ encourage a fair management of the new revenue, through collective bargaining and collective management when possible. The federations say that references in Recital 35 to “contractual arrangements between publishers and authors/rightsholders” (1) and to “Member States’ laws on ownership and exercise of rights in the context of employment contracts” (2), will be used to restrict or bar journalists from benefiting of a fair share of the neighboring right, and jointly call for its deletion.

The European Commission has responded to these concerns in a letter sent last week, saying that:

To mitigate the provision’s negative impact, the federations are urging publishers to agree to a policy and principles for implementation at the national level which can address the shortfalls in the text. In particular, they have called for a joint position clarifying the implementation of Recital 35 (mirroring Article 11) and an agreement that journalists will receive a fair share of the benefits deriving from the neighboring right, irrespective of the contractual terms concluded between publishers and authors, and of national industry licensing standards.

“Tech giants and big business must not earn money from content created by journalists without compensating them fairly. Our organisations have been vocal and instrumental supporters of the Directive, helping to secure its successful adoption in the European Parliament on 12 September. Journalists must receive a fair and unwaivable share of the benefits which will arise from this Directive,” said IFJ President Philippe Leruth.

“We know that everything is not solved, but I strongly believe this directive can give us tools to defend existing rights, improve authors’ rights in the digital economy and ensure remuneration is shared with journalists in a fair way,” added Mogens Blicher Bjerregård, president of the EFJ. “What we have achieved is also a result of cooperation among authors’ organisations, within the creative industry and of an agreement with the newspaper publishers’ organisation of that remuneration must be shared with journalists in a fair way,” he added and welcomed “a good dialogue with the publishers urging our respective affiliates to respect of 11 (4a) also at the national implementation”.

“The directive represents a major step towards ensuring that journalists and other creators can thrive in the digital economy. We now need to work hard to ensure that its unhelpful provisions are clarified and that it is implemented in a way that guarantees a fair share of the new revenue to journalists in all EU member states”, concluded Mike Holderness, Chair of the EFJ Authors’ Rights Expert Group.

Key provisions for journalists in the proposed directive: