Hungary: almost 78% of the media are pro-government 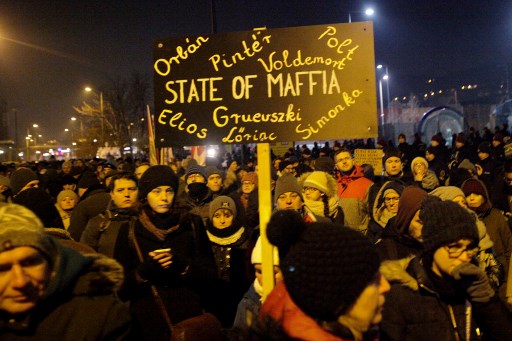 
The European Federation of Journalists has expressed concerns over the state of media freedom and independence in Hungary following the publication of a study showing that the majority of media in the country are pro-government. It was published on 2 May by the media monitor Mérték and investigates the level of independence of the Hungarian media, stating almost 78% of the media are pro-government. The study, commissioned by a Member of the European Parliament (MEP), Sven Giegold (the Greens), shows the far-reaching media power of the ruling Fidez-party.

In November 2018 the creation of the government-related media foundation KESMA uniting 400 Orban-loyal media producers had caused many concerns. According to the study, 64,1% of the media with political reporting are pro-government. Adding to this figure the pro-government reporting from the public service broadcast, the amount rises to 77,8%.

MEP Giegold said,”Hungary is a particularly frightening example of what happens when you simply watch for too long instead of insisting on respecting the fundamental value [of press freedom].” “The EU must finally make the protection of press freedom a priority and take action against state media concentration.”

Since Orban’s Fidez party has come to political power, it initiated far-reaching changes in the media sector: from new media laws to personnel restructuring in public broadcasting and redistributions of advertising money to Fidez-friendly media. In an interview with the German regional public broadcaster, ARD, a former journalist of the Hungarian press agency, Janos Karpati, talked about the language regulations for refugee reports. He said, “You have to choose the term ‘illegal migrants’ – even if it’s obviously about people fleeing life-threatening situations.”

In December 2018, thousands of Hungarians demonstrated in front of the headquarters of MTVA, the public service broadcaster, demanding its independence. Since Orban’s Fidez party came to power, Hungary has slipped from 23rd to 87th position in the press freedom ranking of Reporters Without Borders. The entire study can be downloaded here: https://mertek.eu/en/2019/05/02/fidesz-friendly-media-dominate-everywhere/

Recently, the Association of Hungarian Journalists (MÚOSZ) established the journalist award “For our Europe” in order to appreciate Hungarian journalists, who “have been contributing with excellent, balanced and objective reporting on the European Union, on the European ideas, values, developments and problems to a better understanding […]” of Europe. “Our intention is to counterbalance the one-sided and misleading news distributed by the public media, controlled by the Hungarian government […]”, said Andras Trom, vice-president of MÚOSZ. This year, the prize was awarded to Katalin Halmai, Brussels correspondent of the Hungarian daily “Népszava”, Tamás Kugyela and Balázs Márton, editors of Eurologus blog of Index.hu news portal and János Kárpáti, former Brussels correspondent of the Hungarian News Agency.