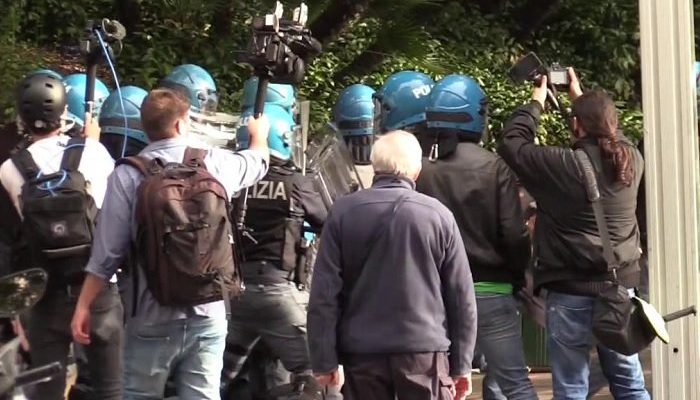 
On May 23, Stefano Origone, an Italian journalist was beaten up by riot police officers while covering clashes among demonstrators in a rally of the far-right party CasaPound in Genoa. A video published by Origone’s employer, the Italian daily newspaper La Repubblica, shows that he was being kicked at and beaten up with batons even though he identified himself as a journalist. The European Federation of Journalists (EFJ) was shocked by the attack of the Italian police on Origone and called for an investigation of the attack.

According to Origone, he had huddled on the ground in a foetal position without defending himself. However, the police continued to beat him until another police officer, Giampiero Bove, stopped the beating because he recognised Origone. As a result of the beating, Origone has a fractured rib, two broken fingers, a head trauma and bruising all over his body. In a report published by La Repubblica, the journalist describes a new level of police brutality. “They unleashed an anger that I had never experienced before, [and] that I had never felt so brutal during the thirty years of my career, always on the road,” Origone said in the article.

On May 24, La Repubblica published an interview with Genoa Police Superintendent Vincenzo Ciarambino, in which he apologised to Origone. According to the German broadcaster Deutsche Welle, the Italian police has opened an investigation on the case.

“What happened yesterday in Genoa to the journalist Stefano Origone being beaten while he was doing his job, is a serious and intolerable fact,” said Giuseppe Giulietti, President of the Italian National Federation of Press (FNSI).