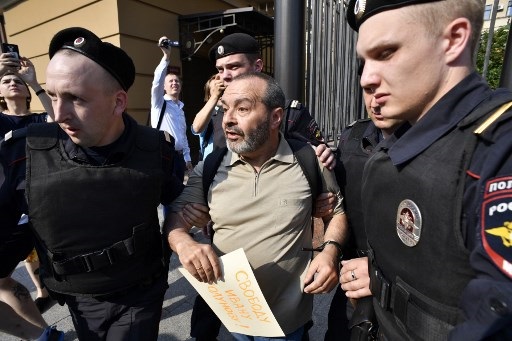 
Update (11.06.19): On Sunday 9 June, a Moscow court released Golunov into house arrest. Despite the fact that his trial is still ongoing, the decision was celebrated as a first victory, because the standard procedure in drug-related cases is to keep people in custody. Golunov reported about beatings during his investigation. An ambulance determined a concussion, bruising and possible broken ribs. Meanwhile the case caused a public outcry followed by a wave of solidarity from a wide range of newspapers and media houses. According to BBC Moscow correspondent Steve Rosenberg, “in the world of Russian media, acts of solidarity are rare”. The three Russian newspapers Vedomosti, RBC, and Kommersant published yesterday a similar frontpage with the headline “I/We are Ivan Golunov”. On Friday, at least 100 people had demonstrated in the center of Moscow against Golunov’s arrest. Several journalists who had been arrested have been released the same day.

Russian police have arrested on Thursday prominent investigative journalist Ivan Golunov on drug-dealing charges that he claims were fabricated. The European Federation of Journalists (EFJ) called on the Russian authorities to immediately release Ivan Golunov.

Police said Golunov was carrying several bags of mephedrone, a club drug, when he was stopped and searched by police on a Moscow street on Thursday, on his way to a meeting with a source. Golunov said the bags were planted and accused police officers of punching and kicking him while in detention. He was deprived of his right to call his lawyer or colleagues more than 12 hours after his arrest.

Golunov is reported to have requested that swabs be taken of his hands and fingernails to prove that he had not been in contact with the drugs, but police refused to do so. Police also refused to forensically examine of the journalist’s backpack.

Journalist Andrei Jvirblis, from the Russian Trade Union of Journalists and Media Workers (ProfJur), told EFJ that Moscow police have begun arresting those who initiated individual pickets outside the central Moscow branch of Russia’s Internal Affairs Ministry to demand the release of Ivan Golunov (our picture): “A dozen demonstrators, including journalists, were arrested. And the police are trying to disperse the rally.”

“We ask Moscow prosecutors to review the legality of police actions,” said EFJ General Secretary Ricardo Gutiérrez. “Together with many prominent Russian journalists, we are convinced that Ivan Golunov is innocent. We believe that the main purpose of this police operation is to silence him and intimidate all journalists investigating the corruption of Russian officials.”

The EFJ co-signed the alert regarding this case on the Council of Europe Platform for the Protection of Journalism. Read the alert here.