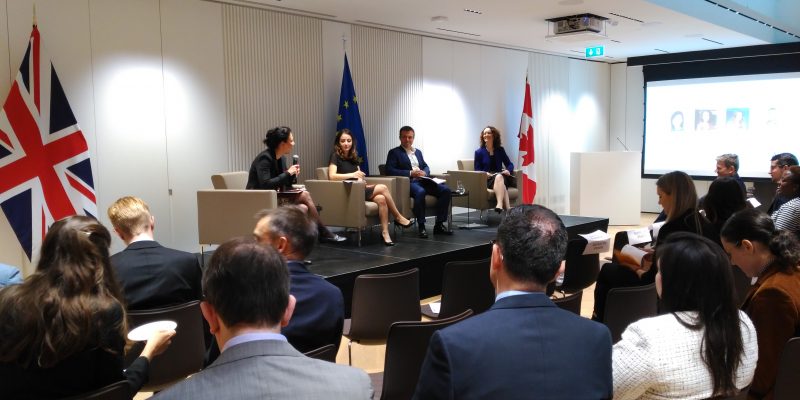 
On 14 June, the UK Representation to the European Union (EU) and the Mission of Canada to the EU hosted the event “Thought is free: Protecting and promoting media freedom”. In two panels, six discussants shared their thoughts on media freedom, fact checking, safety of journalists, the loss of trust in media and the daily struggles of female journalists. The event was organised in the lead of the Global Conference for Media Freedom to take place on 11-11 July in London.

In his opening statement, the Ambassador of Canada Dan Costello quoted journalists to be “modern heroes”, listing a worrying number of attacks and killings during the last year. Paul Johnston from the UK Representation to the EU added, journalists were “on the front line to defend European democracies.”

Therefore the participants were invited to discuss on the topic of media freedom and democracy support in the digital age. Asked about the biggest challenges for the media in the coming years, Juliane von Reppert Bismarck, founder of Lie Detectors, called for more media literacy in order to fight disinformation. “There is no place in the world considered as safe for journalists anymore”, said Adeline Hulin from the UNESCO, claiming impunity and a declining trust in the media to be the two biggest challenges. Jurgis Vilcinskas from the European External Action Service asked for a better financial support of investigative journalism in order to fight thriving political corruption. On the topic of safety, Tom Gibson from the Committee to Protect Journalists (CPJ) introduced the platform on “Protection and safety of journalists” hosted by the Council of Europe.