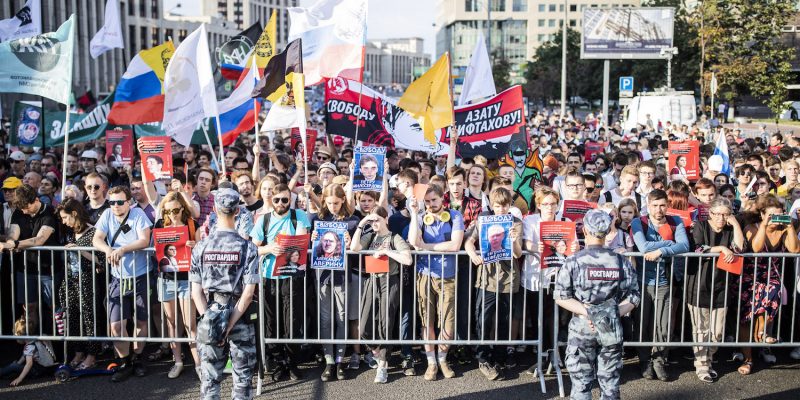 On Sunday 23 June, around 4,000 people gathered in Moscow, Vladivostok, St Petersburg, Perm, Makhachkala to protest against the fabrication of criminal charges to incriminate journalists and human rights activists in Russia. The Journalists’ and Media Workers’ Union (JMWU) was one of the moving forces in this campaign.

The Meduza journalist Ivan Golunov was freed on 12 June thanks to the unprecedented campaign of social pressure and solidarity from the journalism community and civil society as a whole. Against this backdrop, journalist Igor Rudnikov, who was threatened with 10 years in prison on absurd charges of extortion, was also freed.

However many journalists are either already serving time, having been sentenced on extremely suspicious charges, or are awaiting trial dates for completely ridiculous, often clearly fabricated cases.

Speaking at Moscow’s “Society Demands Justice” protest on 23 June, co-chairman of the JMWU Igor Yasin listed several of these journalists by name : Aleksandr Tolmachev in Rostov-na-Donu, Aleksei Nazimov in Alushty, Aleksandr Valov in Sochi, who have been sentenced for alleged “extortion.”

Another particularly disturbing new pattern is the investigation of journalists for the so-called “justification of terrorism,” as in the cases of Svetlana Prokopieva in Pskov or Viktor Korb in Omsk. Other journalists have been accused of participation in the activities of forbidden terrorist organisations, as in the case of the Crimean journalist Remzi Bekirov or the Dagestani Abdulmumin Gadzhiev.

The correspondent of the Ukrainian agency Ukrinform, Roman Sushchenko was sentenced for the heavy crime of espionage, but doubts have been raised over the secrecy of the trial and the possible political motivations given the poor state of Russian-Ukrainian relations. JMWU considers the investigation of the director of RIA Novosti Ukraine, Kirill Vyshinskii, for treason, to be politically motivated. The JMWU regards the present situation unacceptable, as journalists are being used as bargaining chips in political games, independent of their beliefs or their work for any particular media outlet.

Yasin also noted that in Russia the space for free media is being limited by the actions of the government and the business structures, as the social guarantees and benefits for media workers are being cut, making journalistic work more precarious.

“In these conditions, it is impossible to defend the media freedom and freedom of the press without defending all the rights and interests of journalists—labour, social, and civil rights. I urge journalists to build together independent structures and union organizations for this task,” JMWU co-chairman Igor Yasin said.