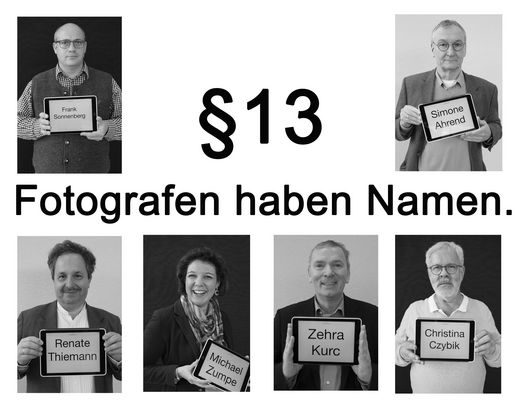 
When it comes to crediting photojournalists below their pictures, big german newspapers perform worse than smaller ones. That’s the result of the 2019 ranking by the EFJ German affiliate, Deutscher Journalisten Verband (DJV). The ranking is part of a campaign called “Photographers do have names” with the main goal to raise awareness about photojournalists who are often deprived of their right.

DJV investigated 87 nationwide selected newspapers in a random sample and found out that smaller newsrooms performed far better in quoting photographers than bigger ones. This year, the three Bavarian Newspapers Fränkische Landeszeitung, Main Post and Nürnberger Nachrichten were on top of the list with a quota between 78 and 81 per cent of credited pictures. Big german newspapers such as the Handelsblatt, Die Tageszeitung (taz) and the tabloid BILD happened to have quoting rates below 50% with the Frankfurter Allgemeine Zeitung (FAZ) (14%) at the bottom.

Since the initiative started in 2012, the situation slowly starts to improve. “We have the impression that the action unfolds effect, albeit very, very slowly,” says Michael Hirschler from the freelance and photojournalist department of DJV. ” Some newspapers that used to be at the bottom are now at least in midfield”, he explains.

“Photojournalists have a legal right to be named”, reminds DJV Federal Chairman Frank Überall. He considers newspapers at the top of the list having a high level of respect for the photographers’ work. The right of photographers to appear below their pictures is regulated by German law in § 13 of the Copyright Act, but according to DJV it i is not sufficiently respected by many media.

The DJV strikes, that the inquiry doesn’t claim scientific correctness. The detailed results, methods and the full ranking can be found here.