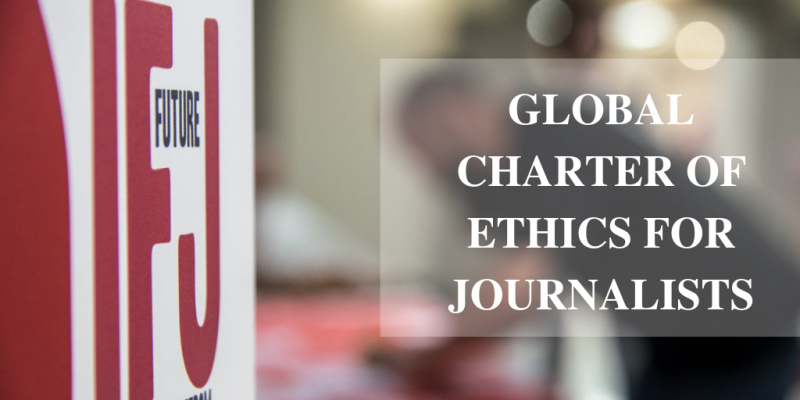 
Journalists’ unions around the world endorsed on 12 June, in Tunis, a new Charter of Ethics for Journalists following months of consultations. The document builds on and reinforces the ethical standards laid down by the 1954 IFJ Declaration of Principles on the Conduct of Journalists, the most widely recognised text on journalistic ethics to date. That Declaration was drafted in Bordeaux, France, 65 years ago, and was last updated in 1986, hence the need for a new Charter adapted to current challenges facing the media.

Drafted by a working group of 16 people, including representatives of the IFJ leadership, regions and ethics experts, the Charter will form the core of strengthening ethical standards for journalists worldwide. Based on major texts of international law, in particular the Universal Declaration of Human Rights, it contains 16 articles plus a preamble and defines journalists’ duties and rights regarding ethics.

The Charter’s preamble states: “The journalist’s responsibility towards the public takes precedence over any other responsibility, in particular towards their employers and the public authorities.” It recalls that journalism is a “profession” that “requires time, resources and the means to practice”. Other main provisions cover respect for truth, conflicts of interest, protection of sources and discrimination.

IFJ General Secretary Anthony Bellanger said: “The adoption of the Global Charter on the Ethics of Journalists is  a milestone in the IFJ’s history because ethics was one of the IFJ’s founding pillars when it was created in 1926 in Paris. This new document takes up the professional duties laid down in 1954, but it also includes rights, in a world where the profession is being abused. Tomorrow, all journalists around the world will be able to identify themselves with the IFJ’s Global Charter of Ethics and challenge it against unscrupulous employers.”